An Unexpected Party: How Kangana, Imran Ended up in Katti Batti 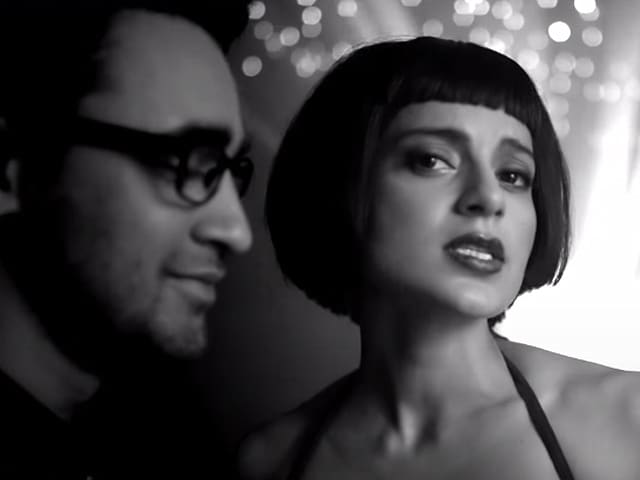 Kangana and Imran in a still from Katti Batti.

Mumbai: Kangana Ranaut has been on a roll-unprecedented levels of critical acclaim for her roles (particularly her last two). More, they have been built around her rather than a male lead, and now she is said to be the highest paid actress in the industry. She's been busily breaking glass ceilings and has done it doing what she loves. But in the forthcoming Katti Batti, a few things were a little different. By her own admission, this is, unusually, not her film. Or not just. "In the film he's clearly the protagonist and I'm clearly the antagonist. He drives the plot," Kangana says about co-star Imran Khan.

She goes on to admit that this is no longer due process for her, especially since he was cast first. "When Nikhil (Advani, the film's director) called me, he said he has got Imran on board. You know usually, and this is a very superficial way of looking at projects, but usually, when my films are cast usually I'm the first one that gets cast. And I think this is how it works, that the person who drives the plot, is the person is cast first but I dont see many films that I am approached for where I get to hear "ok this persons in board and now we want you." Usually I avoid such projects, because I always have a line-up of 5-6 directors just waiting to direct to me and then they will plan on everything else. So naturally that becomes your priority because you as an actor are getting meatier roles." (Also Read: Kangana, Imran Kissed For 24 Hours in Katti Batti Song)

Clearly there was meat to this, but we'll get to that a bit later. It is an interesting bit of casting, remember: while Kangana was fresh off the success of Queen, Imran Khan was reeling from the incredible lack of response to Gori Tere Pyaar Mein. He spoke about that fateful Friday. "The release has come and gone. The film has tanked like nobody's business. The lowest opening I've ever had. Suddenly, suddenly offers have dried up, my phone has stopped ringing, the offers that I had have disappeared. On Friday itself, this stuff has happened - by that evening. Saturday morning, Nikhil Advani asks, 'When can I come and see you?' Friday morning, my film has released - by Friday afternoon, people are running for the hills, people are ditching me dropping me, not taking my calls, Nikhil is the first one to call me: 'when can I narrate?'"

According to Nikhil, his reasons for doing it were simple. "I think I chose Imran, Kangana chose me - that's the way I look at it. I knew when I read and worked on the script, Sid (Roy Kapur) asked me who do you want for the film? I said Imran, he's the right guy for the part. If he doesn't do it I don't think we should do the film because he's the best person for the film. And we did debate it, box office and all that and I said that if everything was going great we would be standing outside his door begging him to do this film. Why does that change now? There's nothing wrong in doing a Vishal Bhardwaj film or a Milan Luthria film or a Dharma film. The films didn't work, why was he blamed for them? He's superb in this film. He's meant for this role."

And, best of all, what he thought then, he thinks now as well: "I think that I got Imran Khan at a very good time. Most people would scoff at that, but it was a great time when I got him in his career. Which is that he's so hungry to prove everyone wrong. I think he was very hungry and also what has worked in terms of Imran's performance is working with Kangana. Kangana came post-Queen and post everything, so we were doing Katti Batti while Tanu weds Manu Returns was being made so the thing of 'Oh my God I'm working with this powerhouse that the whole world loves right now' made him feel 'I need to pull my socks up.'"

For Kangana, the reason she considered it in the first place, was curiosity. "Salman (Khan) said you should hear him out because this is a role tailor-made for you. And so I wanted to see what does he think of me as an artist? He hasn't worked with me so I wanted to know what his perception of me as an actor is, because he's not that open with his perceptions." The reason she accepted was that she was enchanted. Katti Batti looks to be about love and lust and sex and identity. It's about a boy called Maddy and his love for a girl called Payal - a character who insists she only has time for time pass love, a character who will hump delightedly in the background as a landlord quizzes her boyfriend. It has in short meat. "It's such a delightful story and I think I've been around for a while, enough to know that it's eventually about being part of films that satisfy you, an amazing film. I wish I could talk a lot more about the character because there's a big fat reveal which I can't share, but I'd say after doing Katti Batti and playing Payal's character, I'm a better person. Because there are so many perspectives that you miss, it's not that you compare yourself, it's just if you be that person and see life from her eyes so much changes for you, you have a new perspective. Not good or bad - it just changes. The shift happens and nothing is the same again. And I'd say the character, it has hit me very hard," Kangana says. (Also Read: Salman Khan Called me About Katti Batti, Says Kangana Ranaut)

Imran concurs, even though he admits the film happened "despite his best efforts." He recounts how when he first read the script he called Nikhil to tell him he "actually disliked it quite a lot." It was only when the narration happened that he got the perspective that he says didn't come across on paper and accepted instantly. "The realness and the fact that it's so organic. That a fight can turn to sex and vice versa. A beautiful, tender, sexy moment can erupt into a fight just because you say the wrong thing, do the wrong thing. And that's something that happens in real life. I'm telling you, Katti Batti has far more to it than anyone is expecting. From our first promo there will be a tendency to assume that this is another rom-com and that Kangana is slumming it in the Bollywood rom-com space. That is entirely wrong. It is a film I would be entirely proud of any time, any place. " (Also Read: 'Katti Batti's Payal Tougher to Play Than Datto,' Says Kangana)

It's an adventure - love and sex involving modern, emancipated characters trying to figure it out. They're proud too that sex is on the table - they say not with coy blushes or suggestive winks, but also without shock or scandal. Nikhil Advani explains, "I'm doing this film ten years after Kal Ho Naa Ho. So we've all grown up. We like to deprecate ourselves say we're jaded. But actually, we've been through it - had our heartbreaks, stayed in relationships that we should not have stayed in. So we've done all that. I feel if I was going back to the genre, I didn't want to do the same running on Brooklyn Bridge holding my heart. Don't get me wrong, it was beautiful and I loved it. I LOVED it. Shah Rukh (who starred in Kal Ho Naa Ho), I remember, asked me 'Why am I running if I've just had a heart attack?' and I said because you look fantastic running on Brooklyn bridge so run. But with this, a lot of credit needs to be given to a) UTV for backing the script, and backing the vision of what I wanted to do with it b) I think a lot needs to be given to people like Shoojit Sircar, Farhan Akhtar, Gauri Shinde and Ayan Mukherji. They have opened the audiences. I think I am just taking it one step forward."

For an audience fed on flowers blowing in the wind and an industry that has mastered the art of turning passion into primness, the hope for Katti Batti is that it will serve as both a sign of the times and a signpost for where to head next.