Though there are hundreds of contenders for this list, here are 10 picks that always come to mind. 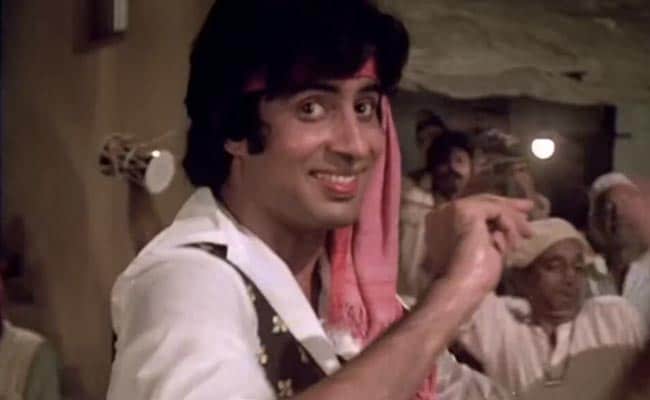 In a career spanning over five decades, Amitabh Bachchan has delivered many mega hits. His deep baritone voice packed a solid punch whenever he mouthed his dialogues on the screen. Though his voice and acting prowess made him stand apart from the crowd, Amitabh Bachchan's name is also synonymous with several hit songs that have gone on to achieve cult status in Bollywood. Any playlist of Amitabh Bachchan's songs offers something for every fan — be it the charm of the '60s, foot-tapping rhythms of the '70s that set the dance floor on fire even today, or the romance of the '80s.

While some of his songs have beautifully interpreted love, others, with their Indo-Western sounds and fast-tempo, went on to become trendsetters. Though this space is too less to pick just the 10 best songs from Amitabh Bachchan's career, we have curated the ones that instantly come to mind. Here you go:

The album of Kabhie Kabhie will always remain an ode to brilliant melody. The title song from the Yash Chopra classic — picturised on Amitabh Bachchan and Rakhee — was sung by Mukesh and Lata Mangeshkar, and is arguably one of the most romantic songs of all time. The movie also redefined Amitabh as a romantic hero. Till then he was known for his “angry young man” image. The song has some of the best lyrics of the times, with the line “tu ab se pehle sitaaron mei bas rahi thi kahin, tujhe zameen pe bulaaya gaya hai mere liye” being the highlight.

It's one of the most loved Amitabh Bachchan-Kishore Kumar solos. The song, with lyrics by Anjaan and music by Rajesh Roshan, also features Neetu Singh. The best line, according to us, has to be “tu jo kahe jeevan bhar, tere liye main gaoon, geet tere bolon pe, likhta chala jaoon”. Such is the recall value of this song, that even 25 years after the movie's release, Aamir Khan was heard singing “Sue kar kere mann ko” in Rang De Basanti (2006), trying to woo British actress Alice Patten, whose character is called Sue. Click here to watch the song or listen to it.

This hit number, picturised on Amitabh and Jaya Bachchan, is capable of giving goosebumps to the listener. In the film, it comes at a poignant point when the couple decides to reconcile following a brief separation due to Amitabh Bachchan's character letting his ego get the better of him. The mellifluous rendition by Kishore Kumar and Lata Mangeshkar is taken to a highly emotional level by the two actors who do a top-notch job with their expressions. The song, composed by SD Burman, was also an inspired creation from Tagore's Jodi Tare Nai Chini Go Sheki.

Amitabh Bachchan and Kishore Kumar weave magic yet again in this iconic song from the Yash Chopra classic. It's one of the best Kishore-Lata duets, with the lyrics being by Javed Akhtar. The magnetic pairing of Amitabh Bachchan and Rekha brings the colourful Tulip gardens of Keukenhof in The Netherlands to life in this song. Apart from the heart-touching melodies, the movie is also synonymous with chiffon sarees, the Swiss Alps, the pain of separation, and insecurity in love.

This song is a cult classic and was picturised on Amitabh Bachchan triumphantly riding a bike and singing with gay abandon — the ultimate alpha male, would you say? It's the title song of the movie and was sung by Kishore Kumar. The song must have been crooned by millions of youngsters on bikes, imitating Amitabh.

Another evergreen song by the Amitabh Bachchan-Kishore Kumar combo, the music was composed by Bappi Lahiri, and the lyrics were by Anjaan. The song shows Amitabh at his entertaining best. Just listening to this hilarious number is enough to cheer someone up. Kishore Kumar's enthusiastic rendition and Amitabh Bachchan's comic timing make this song a great audio-visual treat. You can watch the song and listen to it here.

In this evergreen song, Amitabh is seen singing in a packed auditorium. As the song progresses, we see him gazing into the distance and having flashbacks of his childhood. Kishore Kumar's unmatched voice and Amitabh Bachchan's powerful screen presence are what make this song special!

To date, no Holi has been complete without this iconic song that was picturised on Amitabh Bachchan and Rekha. The lyrics of ‘Rang Barse' were penned by the superstar's father Harivanshrai Bachchan, with Shiv-Hari composing the music. Amitabh Bachchan himself sang it in his unique style, which, even now, is copied by many singers.

This song went on to become a chartbuster after the movie's release. In the song, Amitabh has one paan after the other laced with bhaang. Composed by Kalyanji-Anandji with lyrics by Anjaan, it is said that Khaike Paan Banaraswala wasn't initially meant to be a part of the film. It was added later, after wrapping up the entire film. In fact, in a tweet in 2018, Amitabh himself had said so. He had tweeted, “An afterthought, that became THE thought .. song 'khaike paan banaras wala' was done after film DON was completed ..”.

This is a rib-tickling song that Amitabh Bachchan lent his voice to. Written by Anjaan and composed by the legendary duo of Kalyanji-Anandji, it was enacted by the actor in drag. The lyrics are hilarious and the actor's voice makes it sound funnier.

Listening to Amitabh Bachchan songs is always a treat, especially when it's his birthday. Don't you agree? So, this is our top 10 list. Share your playlist with us in the comments below.