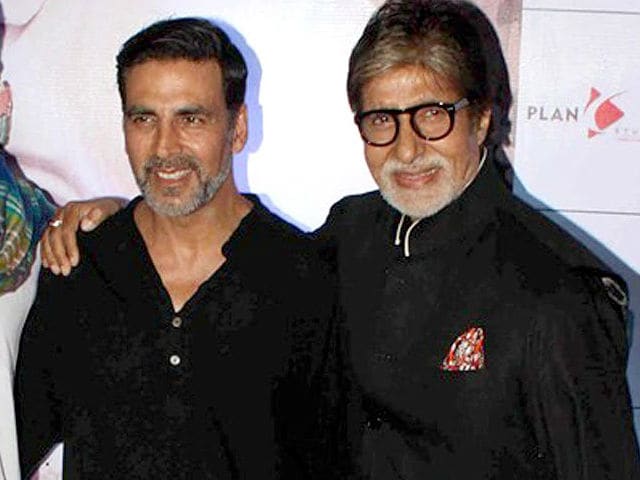 New Delhi: Actor Amitabh Bachchan was recently in New Dlehi to shoot for R Balki's next film - yes, the one which stars Akshay Kumar and is titled Padman. Amitabh Bachchan has starred in Balki-directed Cheeni Kum, Paa and Shamitabh and had a guest appearance in Ki & Ka. "I work tomorrow .. a shoot for R Balki .. for the film he does with Akshay Kumar .. a special appearance for a few minutes. (sic)," Amitabh Bachchan wrote on his blog. "(Balki) must have my presence in some form or another, and so here I am," he added. Mr Bachchan also complimented Balki and wrote: "Balki does carry his sincerity at every step of his creativity."

Amitabh Bachchan and Akshay Kumar has earlier worked together in films like Aankhen, Waqt: The Race Against Time and Khakee. Padman also stars Sonam Kapoor and Radhika Apte and is Twinkle Khanna's first film as producer under her banner, Mr Funnybones Movies.

Promoted
Listen to the latest songs, only on JioSaavn.com
Amitabh Bachchan was last seen in Pink, which won the National Award for Best Film On A Social Issue. The 74-year-old actor is awaiting the release on Sarkar 3, which is directed by Ram Gopal Varma. He reprises the role of Subhash Nagre, a godfather-like figure for many people in his community. The film co-starring Amit Sadh, Jackie Shroff, Yami Gautam and Manoj Bajpayee is slated to release in May.

After that Mr Bachchan will shoot for Ayan Mukherji's Dragon, a superhero film co-starring Ranbir Kapoor and Alia Bhatt. He has also signed up for Thugs Of Hindostan in which he will be seem with Aamir Khan. Thugs Of Hindostan will be produced by Yash Raj Films.