"The space between the eyebrows is called what? Did you know? It's called glabella!" wrote Big B 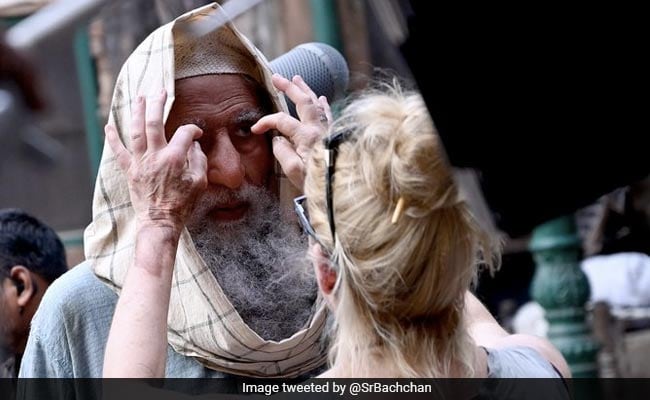 Another day, another picture from the sets of Amitabh Bachchan's Gulabo Sitabo. The actor, 77, shared a new BTS picture from the film's set on Friday and accompanied it with a fun fact. In the photograph, Big B can be seen dressed as his character from the film while a make-up artist can be seen "touching up" his eyebrows on the sets. In the caption, Amitabh Bachchan shared with his fans that the space between the eyebrows is called glabella. "The space between the eyebrows is called what? Did you know? It's called glabella!" he wrote, and added: "Touching up at the shoot of GiBo SiBo... (that's Gulabo Sitabo)." Amitabh Bachchan has, in one of his previous posts, revealed that it took 2-3 hours for him to get the prosthetic make-up done for the film.

Gulabo Sitabo also features Ayushmann Khurrana in the main role. Amitabh Bachchan plays the role of an aged and grumpy landlord while Ayushmann plays his long-time tenant in the film, which is set in Lucknow. The trailer of Gulabo Sitabo has been garnering a whole lot of praise ever since the makers dropped it on the Internet last week. If you haven't seen it yet, take a look now:

Directed by Shoojit Sircar, Gulabo Sitabo will premiere on Amazon Prime Video on June 12. It marks Big B's fourth project with the director after Piku, Pink and Shoebite. This is the first time that Amitabh Bachchan's film will release on an OTT platform.

Other than Gulabo Sitabo, Amitabh Bachchan will also star in Ayan Mukerji's Brahmastra and Chehre, in which he will co-star with Emraan Hashmi.