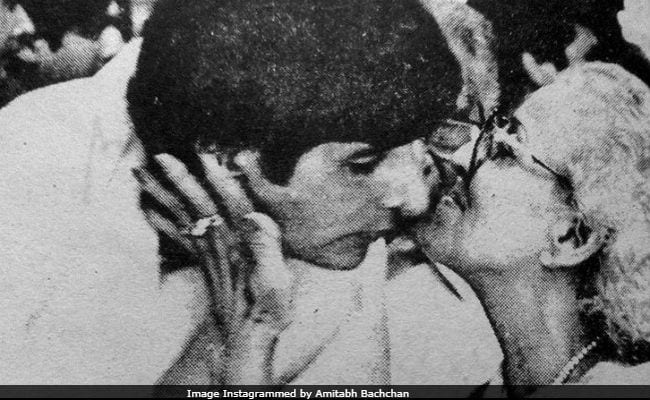 New Delhi: Megastar Amitabh Bachchan posted tributes to his parents Harivansh Rai Bachchan and Teji Bachchan, on Friday on social media. Big B dedicated a tribute to his father on Twitter and a heart-warming post for his mother on Instagram. In his tweet, the Baghban actor shared two photographs - his father's and his own - along with a few lines from his father's poem. "Tumne Humein Puj Puj Kar Pathar Kar Daala; Woh Jo Humpar Jumle Kaste Hain, Humein Zinda Toh Samjhate Hain!! - Harivansh Rai Bachchan." Harivan Rai Bachchan was a noted Indian poet, known for his masterwork Madhushala. He was honoured with the Padma Bhushan award in 1976.

Meanwhile Big B' Instagram post, which features him with Teji Bachchan has been taken when the megastar returned home after his Coolie accident.

Amitabh Bachchan had a near-fatal injury, while shooting a fight sequence with co-star Puneet Issar for his 1983 film Coolie. He underwent multiple surgeries was declared 'clinically dead for a few minutes'. With no sign of life for several days and the doctors treating Mr Bachchan injected adrenaline straight into his heart, on August 2, 1982. His wife Jaya Bachchan, who was present throughout his medical treatment, saw one of his toes move and said: "Look, he's alive."

Last December, Big B shared about the time when his father, veteran poet late Harivansh Rai Bachchan, had an emotional breakdown in front of him. "In my entire life I never ever saw tears in my Father's eyes .. but when I survived my Coolie accident and came home .. he embraced me and broke down ... for the first time in front of me ... !!a moment captured by the media .."

In my entire life I never ever saw tears in my Father's eyes .. but when I survived my Coolie accident and came home .. he embraced me and broke down ... for the first time in front of me ... !!a moment captured by the media ..

Amitabh Bachchan, who is fondly addressed as the Shahenshah of Bollywood, is often seen reciting his father's famous, works Madhushala and Madhukalash. On his father's 15th death anniversary, Amitabh Bachchan had posted a heartfelt post in his Instagram handle, which read: "There was a time then... and then there was a time then... and between the two 'then s' a lifetime..."

Promoted
Listen to the latest songs, only on JioSaavn.com
Big B is currently wrapping up his next Thugs Of Hindostan, which also stars Katrina Kaif, Aamir Khan and Fatima Sana Sheikh. This film is directed by Vijay Krishna Acharya, and is scheduled to release on November 7.

After Thugs Of Hindostan, Amitabh Bachchan will start working on his new project, which is titled Jhund.