"With Sridevi in a ... swimming pool sequence for film Inquilaab," Amitabh Bachchan captioned the throwback picture 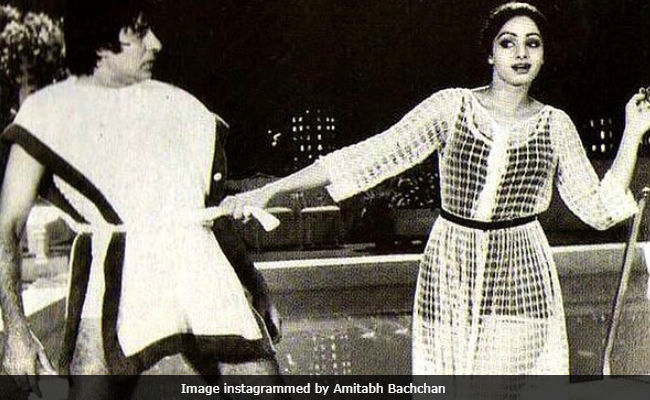 Amitabh Bachchan and Sridevi on the sets of Inquilaab. (Image courtesy: Big B)

New Delhi: Amitabh Bachchan, who it seems has a treasure trove of throwback pictures, shared one on Friday, featuring himself and actress Sridevi from the sets of their 1984 film Inquilaab. Mr Bachchan has worn several bizarre outfits for his films - Shahenshah, the lightbulb jacket in Yaaraana and Jhoom Barabar Jhoom to name a few - but none like this. We can't even describe this one. "With Sridevi in a ... swimming pool sequence for film Inquilaab," he captioned the picture. Amitabh Bachchan and Sridevi have also made films such as Khuda Gawah and Aakhree Raasta together.

Take a look at Amitabh Bachchan and Sridevi's photo here:

With Sridevi in a ... swimming pool sequence for film INQUILAB

Amitabh Bachchan shared several other throwback pictures on Friday. In one of the photos, Amitabh Bachchan can be seen clicking a picture of his children Abhishek and Shweta with his father Harivanshrai Bachchan. "Those wonderful days of young innocence and no mobiles. My father with Shweta and Abhishek and the photographer yours truly," he captioned it.

Those wonderful days of young innocence an NO mobiles .. Mu Father with Shweta and Abhishek .. and the photographer yours truly

In the third picture he shared today, Amitabh Bachchan features with his mother Teji Bachchan after he returned from hospital post his infamous Coolie accident. "Mothers love when I returned home after my Coolie accident from Breach Candy Hospital," he said.

Amitabh Bachchan is a busy star today. He is currently making Thugs Of Hindostan for Yash Raj Films, which also features Aamir Khan, Fatima Sana Shaikh and Katrina Kaif. After that, he will get busy with Kaan Johar's trilogy brahmastra, co-starring Ranbir Kapoor and Alia Bhatt. He is also awaiting the release of 102 Not Out.
Comments
amitabh bachchansrideviInquilaab sets pics