Alia Bhatt Or The Cat, Who Has More Attitude In Dabboo Ratnani-Shot Pic? 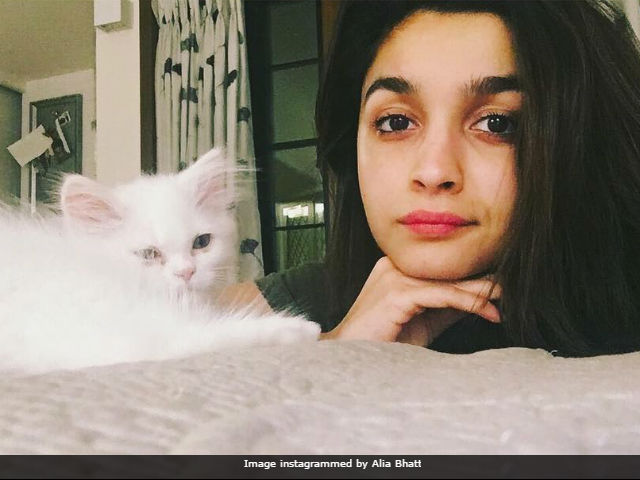 New Delhi: Celebrity photographer Dabboo Ratnani shared a throwback picture of Alia Bhatt from 2014, when the 24-year-old actress featured as part of his calendar shoot. The monochrome photograph features a Persian cat, apparently named Kaalu (as Dabboo uses the hashtag #kaalu in his post). Alia cradles Kaalu, as she poses for the photograph. The Highway actress looks gorgeous, as a serious looking Kaalu stares into the camera. Dabboo wrote, "Love the 'Cattitude,' don't you? @aliaabhatt." Instagram is well acquainted with Alia Bhatt's love for cats. She recently gifted herself a pet kitten, Edward, on her birthday on March 15. And we can't keep our eyes off the cute little fur ball. The 24-year-old actress has been giving updates of Edward, who she calls her 'son' and her 'best bud', on social media.

And Alia's 'son', as Edward has been referred to in one of Alia's posts, has a field day in her book shelf.

The cute little kitten is also her 'pumpkin.'

He is indeed a handsome thing.

Big big hug and thank you soo much for the 15M love! Love you all too much

Promoted
Listen to the latest songs, only on JioSaavn.com
Alia Bhatt was last seen in Badrinath Ki Dulhania with Varun Dhawan. Badrinath Ki Dulhania earned more than Rs 200 crore at the box office. Alia is now gearing up for Ayan Mukherjee's Dragon, where she will be seen opposite Ranbir Kapoor. Dragon also stars Amitabh Bachchan in a pivotal role. Alia earlier told news agency PTI, "Dragon is not a typical superhero film. There will be lot of action around me. I don't think I will be beating up anybody. It's a sci-fi, supernatural film."

Alia is also prepping for Gully Boy with Ranveer Singh.