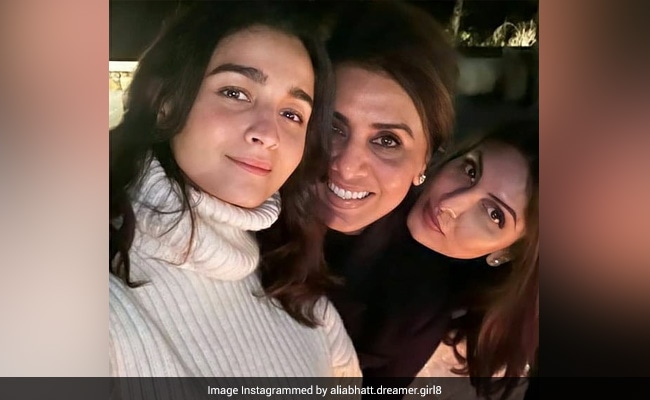 Alia Bhatt and her boyfriend Ranbir Kapoor are making the last few days of 20202 all the more special by spending quality time with each other. The couple have also been joined by their respective families. Both the actors were spotted at along with their families at a private airport in Mumbai along with their families. Meanwhile, the Kapoors and the Bhatts have actively been sharing pictures from their holiday in Rajasthan. A picture of Alia Bhatt with Ranbir Kapoor's mother and veteran actress Neetu Kapoor and his sister and jewelry designer Riddhima Kapoor Sahni is spreading like wildfire on social media. The picture originally posted by Riddhima Kapoor Sahni, was later shared by several fan pages dedicated to Alia and Ranbir on Instagram.

Meanwhile, Deepika Padukone and Ranveer Singh, who also flew to Rajasthan on Monday, were spotted with the Kapoors. A picture of Ranbir Kapoor chilling with Ranveer Singh and Neetu Kapoor is trending big time. ICYMI, this is the picture we are talking about:

Alia Bhatt and Ranbir Kapoor,  who are co-stars in Ayan Mukerji's film Brahmastra, also starring Amitabh Bachchan and Mouni Roy, reportedly stated dating in 2018.They made an appearance together at Sonam Kapoor and Anand Ahuja's wedding reception. However, it was only recently that Ranbir Kapoor referred to Alia Bhatt as his "girlfriend" in an interview with film critic Rajeev Masand. He also revealed that he and Alia would have been married if it weren't for the pandemic. "It would have already been sealed if the pandemic hadn't hit our lives. But I don't want to jinx it by saying anything. I want to tick mark that goal soon in my life," Ranbir said during the interview.