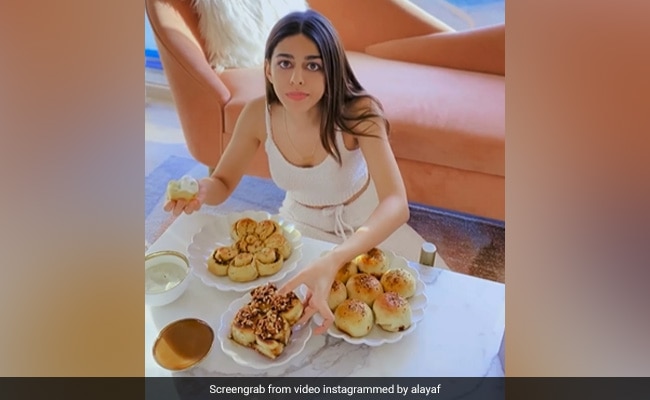 Alaya in a still from the video. (courtesy alayaf)

Alaya Furniturewala is in two minds. Why? Well, the actress can't help but drool. Over some sweet plates of bread in front of her. But a part of Alaya is also asking her not to indulge in these sugary treats. A fitness regime and a healthy diet are important parts of an actor's life. But who can really resist sweet cravings? Alaya's latest Instagram Reels shows her dilemma while she plays double roles to depict her situation. She is seated in front of a table of delicious buns and cinnamon rolls. While she grabs hold of some of these delicacies, a part of Alaya stops her from indulging. But  Alaya finally caves in and takes a bite off the bread.

Alaya Furniturewala captioned it, "Shhh if we ignore it, the calories won't count. I can resist many things, but I can't resist Wicked Breads. Not an ad at all. Just very good breads." Her hashtags included "diet", "cheat day" and "food."

We are glad to see Alaya Furniturewala back to her fun element after recovering from COVID-19. The actress recently revealed her health status. Alaya wrote that she had tested positive for the virus before she was supposed to travel. But she had been asymptomatic and soon tested to be negative. Alaya ended her note by saying, "As of today, I have now tested negative twice."

Apart from testing positive for COVID-19, Alaya Furniturewala's winter diaries were full of fun. The actress went on a vacation to the Maldives. She kept us posted with her candid snapshots and videos from the trip. And, we soon knew why the Internet loves her fresh vibes. Alaya posted about her fear of open waters. And, many of us can relate. She wrote, "A lot of people don't know this but even though I'm a very good swimmer, I'm terrified of open waters so obviously when I went to the Maldives, I was determined to get over my fear." Alaya's video is definitely worth watching:

Alaya Furniturewala is the daughter of actress Pooja Pooja Bedi and her ex-husband Farhan Furniturewalla. Alaya worked with Saif Ali Khan and Tabu on her debut film Jawaani Jaaneman. She will be next seen in Freddy, alongside actor Kartik Aaryan.