Akshay Kumar shared a very intriguing poster of his forthcoming film on social media which features a group of ladies walking down a village alley, carrying a lota in their hands 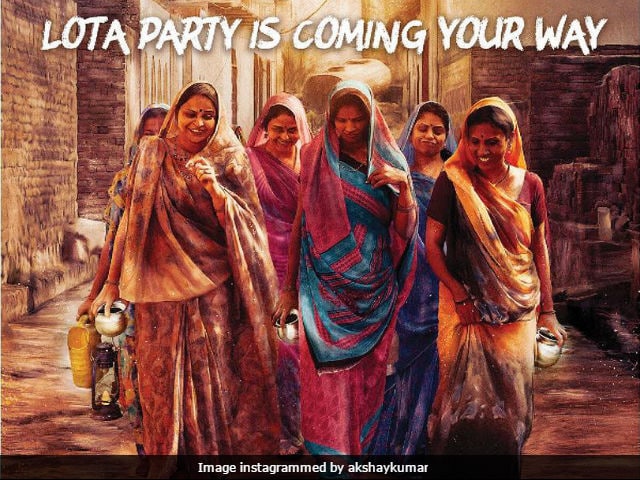 New Delhi: Actor Akshay Kumar has come up with a very different strategy to promote his film Toilet: Ek Prem Katha. Today, the 49-year-old actor shared an intriguing poster of his forthcoming film on social media which features a group of ladies walking down a village alley, carrying a lota ( a vessel used by people for personal hygiene) in their hands. Referring to them as lota party, the Airlift actor requested his fans and followers to send them back. "Ek binati...lauta do lota party ko! #ToiletEkPremKatha," wrote Akshay Kumar. Toilet: Ek Prem Katha, directed by Shree Narayan Singh, deals with the need of sanitization in India and is based on Prime Minister Narendra Modi's Swachh Bharat initiative.

Since Monday, Akshay Kumar has been sharing a series of posters and videos to countdown the release of Toilet: Ek Prem Katha trailer, which will be unveiled on June 11.

In May, Akshay Kumar met Prime Minister Narendra Modi and Railway Minister Suresh Prabhu to brief them about his upcoming film. In a tweet, Mr Prabhu praised the Housefull actor for his efforts to create awareness about Swacch Bharat Abhiyan through his film.

On May 3, Akshay Kumar received the National Award for Best Actor for his performance in Rustom.

Promoted
Listen to the latest songs, only on JioSaavn.com
Akshay Kumar last featured in Naam Shabana, co-starring Taapsee Pannu. He will be seen in S Shankar's 2.0 along with superstar Rajinikanth, after Toilet: Ek Prem Katha.