"A heartfelt thank you to all my well-wishers from India and all around the world," wrote Aishwarya Rai Bachchan 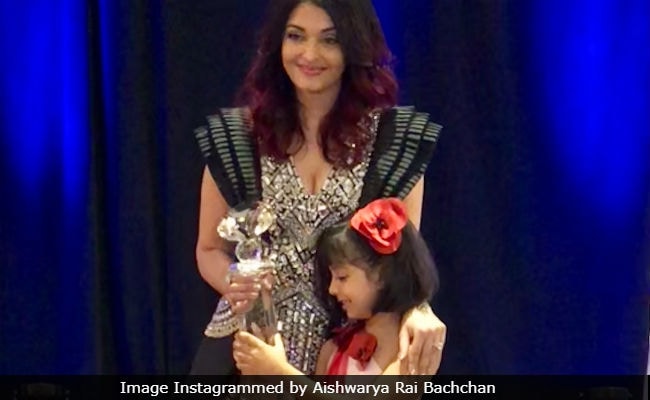 Aishwarya Rai Bachchan received Meryl Streep Award for Excellence at the first edition of Women In Film and Television (WIFT) India Award along with her daughter Aaradhya. We got a sneak peek into the actress' big moment through her Instagram posts. The 44-year-old actress was not only accompanied by her daughter Aaradhya but also her mother Vrinda Rai at the ceremony, which was held in Washington DC. Aishwarya documented different facets from the ceremony on her Instagram account, from pictures of her collecting the award with Aaradhya, to sharing some loved-up BTS moments. For the special day Aishwarya opted for a dreamy embellished black outfit and she looked absolutely stunning, Aaradhya on the other hand looked cute as a button in a pink gown.

Aishwarya posted pictures of herself and Aaradhya receiving the trophy and wrote: "You my Aaradhya complete me. Divine Blissful Eternal love."

You my Aaradhya complete me Divine Blissful Eternal LOVE

A post shared by AishwaryaRaiBachchan (@aishwaryaraibachchan_arb) on Sep 9, 2018 at 1:24am PDT

Aishwarya also thanked and her fans in a separate post and wrote: "A heartfelt thank you to all my well-wishers from India and all around the world, for being my Inspiration and strength. God bless and all my love too."

A Heartfelt THANK YOU to ALLLL my well-wishers from India & All around the world,for being my Inspiration n Strength God Bless and all my love too

A post shared by AishwaryaRaiBachchan (@aishwaryaraibachchan_arb) on Sep 9, 2018 at 1:54am PDT

LOVE YOU and THANK YOU

A post shared by AishwaryaRaiBachchan (@aishwaryaraibachchan_arb) on Sep 9, 2018 at 12:52am PDT

A post shared by AishwaryaRaiBachchan (@aishwaryaraibachchan_arb) on Sep 9, 2018 at 12:34am PDT

Needless to say, Aishwarya Rai Bachchan is very close to her daughter. In an interview with news agency IANS this year, she said that for her, Aaradhya comes first and "everything else in secondary". She told IANS: "Of course, after Aaradhya my priorities have changed completely. She comes first, everything else is secondary."

Aishwarya Rai Bachchan and Abhishek Bachchan got married in April 2007 and they welcomed daughter Aaradhya on November 16,2011.