Soha Ali Khan posted on Instagram, "It feels right when you hug me so tight #HappyHugDay" 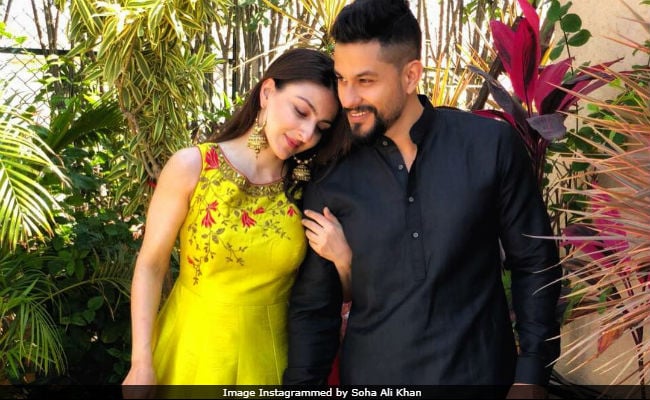 New Delhi: Actress Soha Ali Khan and Kunal Kemmu are giving us major couple goals. The Ahista Ahista actress posted a sweet picture on her Instagram and wrote, "It feels right when you hug me so tight #HappyHugDay." The couple's photo reminds us that the Valentine day is just around the corner. The couple also keeps us updated about their love through several cute pictures and videos. Remember, when Kunal shared this stunning photograph of the two on his Instagram and captioned it: "The sunshine and miss sunshine #throwback #croatia #traveldiaries"?

....and here's another one from her side

Sohal Ali Khan and Kunal Kemmu got married on January 25, 2015, after the latter proposed her on their trip to Paris. She announced the news of her wedding on Twitter with this picture and wrote: "I married my best friend today."

Promoted
Listen to the latest songs, only on JioSaavn.com
The couple welcomed their first child - daughter Inaaya Naumi Kemmu - on September 29, 2017. Kunal introduced Inaaya Naumi to the world on the occasion of Children's Day, "Wishing all the children everywhere and my little munchkin a very happy children's day. May your innocence continue to inspire us to be better people #happychildrensday," he wrote on Instagram.

Kunal was last seen in Rohit Shetty's Golmaal Again, also starring Ajay Devgn, Arshad Warsi, Tusshar Kapoor, Parineeti Chopra and Tabu. He currently has Go Goa Gone 2 in the pipeline. Soha, who was last seen in Ghayal Once Again, will be next seen in Saheb, Biwi Aur Gangster 3. She recently launched her book called The Perils of being Moderately Famous.