Ages "9 To 90," It's Fitness First For Everyone In Ranvir Shorey's Family 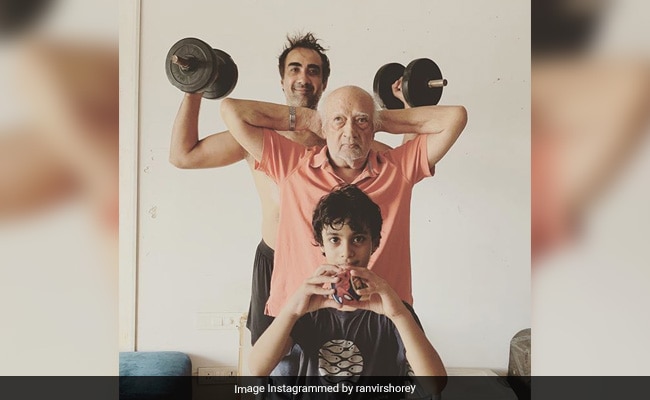 Lockdown or no lockdown, there's no way Bollywood celebrities would compromise on their fitness. The latest example is actor Ranvir Shorey. On Monday, the 47-year-old-actor shared a picture from his house, which also features his 9-year-old son Haroon, and his 90-year-old father DK Shorey. The common factor - all the three generations can be seen working out together. Ranvir captioned the post, "Fitness: 9 to 90. Lockdown life." The comments section on the post was replete with remarks like "This is too lovely" and "very cool." If this picture of the Shoreys doesn't inspire you to work out, we don't what will.

Ranvir Shorey and Konkona Sen Sharma had been dating for three years before they decided to get married in 2010. They separated after five years of marriage. The actors continue to co-parent their child Haroon. They have worked together in films like Mixed Doubles (2006) and Aaja Nachle (2007), Gour Hari Dastaan: The Freedom File (2015), and A Death In The Gunj.

In terms of work, Ranvir Shorey was last seen in the Netflix show Hasmukh, featuring Vir Das. His last film was Angrezi Medium, co-starring Irrfan Khan, Kareena Kapoor and Radhika Madan. The actor is best-known for his performances in films such as Titli, Singh Is Kinng, Aaja Nachle,Gali Guliyen and Sonchiraiya, among others.

He also starred in the Hotstar show The Office - official adaptation of the international series by the same name. He has also been a part of Sacred Games, Bombers, Rangbaaz, among others.