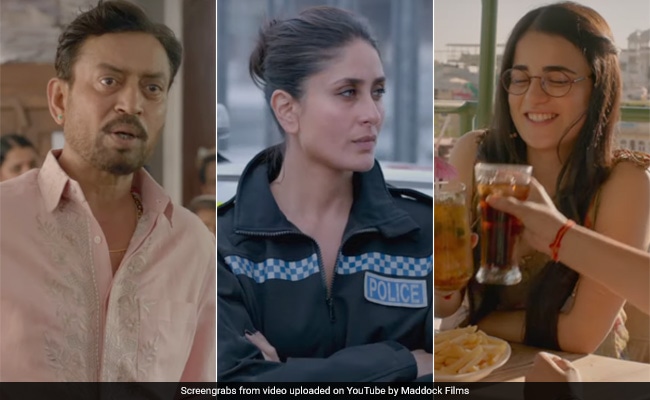 The wait is over for the Angrezi Medium trailer! The cast of Angrezi Medium says a lot about the film's ROFL quotient. Headlined by Irrfan Khan, Angrezi Medium also stars Kareena Kapoor, Radhika Madan, Deepak Dobriyal, Dimple Kapadia, Ranvir Shorey, Pankaj Tripathi and Kiku Sharda. Angrezi Medium, which is a spin-off of Irrfan Khan's 2017 comedy Hindi Medium, is an emotional story of the relationship between a single father and his daughter. Irrfan Khan has been cast as Champak, an Udaipur based mithai wala, who is very attached to his teenaged daughter Tarika, played by Radhika Madan. Champak initially equates Tarika's dreams of studying abroad to moving to Jaipur. But Tarika, who is a topper at her school in Udaipur, is headstrong and convinces her dad to arrange for fees for her admission in London's 'Truford University.'

The trailer begins with Champak attempting to deliver a speech in Tarika's school in English. Then the trailer introduces Deepak Dobriyal aka Dheeraj as Champak's frenemy - the two fight over the authenticity of Champak's sweet shop. But then it is Dheeraj who accompanies Champak to London to fulfil Tarika's dreams. One of their first encounters in London turns out to be with Kareena Kapoor, who plays a tough cop named Naina.

In the second half, the Angrezi Medium trailer switches to a serious mood. It appears that Champak fails to arrange for Tarika's university fees, when she blames her father for ruining her dreams.

The trailer of Angrezi Medium will give you mixed feelings. Watch it here:

Directed by Homi Adajania, Angrezi Medium is all set to open in theatres on March 20.