After Epic Glam Fail, Shruti Haasan Is In "Too Much Hair Don't Care" Mode

Clearly, Shruti is too glam to give a damn about her messy hair in these pictures 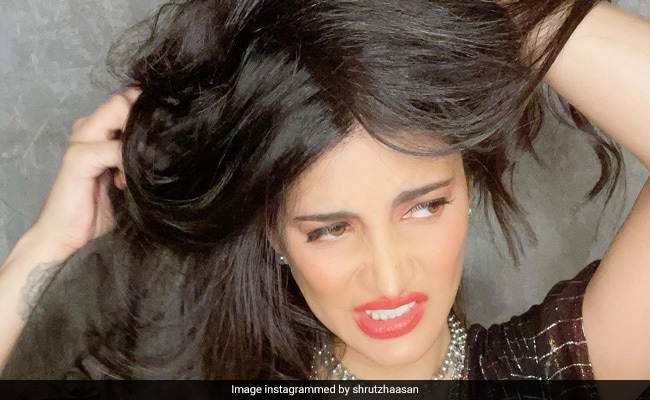 Shruti Haasan's latest post on Instagram proves that she is too glam to give a damn about her messy hair. The actress, on Wednesday, posted two pictures of herself to hilariously show her attempt at "getting the whole glam thing right" in her own ways. In the first photo, Shruti Haasan, dressed in a black and gold outfit which she paired with what appears to be a beaded necklace, can be seen making an annoyed face expression. In the next picture, the actress can be seen playing with her hair. "Clearly, I'm getting the whole 'glam' thing right," she wrote in the caption with a laughing icon and added the hashtags #epicfail and #toomuchhairdontcare.

Shruti Haasan recently occupied a spot on the list of trends after she opened up about her parents Kamal Haasan and Sarika's separation. In an interview with Zoom Digital, she said she "was glad" her parents "separated" because she doesn't think "two people who are not getting along, should be forced to get along for some reason." She said: "They were not that beautiful together anymore. That does not take away their individual beauty as human beings. When they separated, I was very young, and it was very simple, they were happier apart than they were together."

Shruti Haasan has been staying with her boyfriend Santanu Hazarika during the lockdown. The duo have been together for quite some time now.

In terms of work, Shruti Haasan will be next seen in Salaar with Prabhas.