"Addicted To Kaun Banega Crorepati": Amitabh Bachchan Posts New Pics From The Sets Of The Show

This time, the photos also feature one of the participating contestants 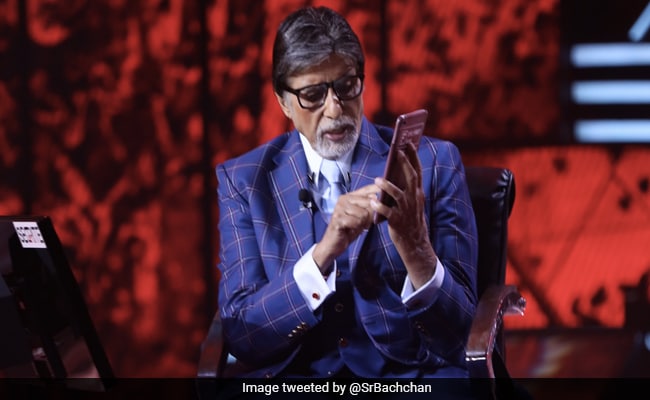 Amitabh Bachchan, who is currently busy shooting the new season of popular quiz show Kaun Banega Crorepati 12, shared a new set of pictures from the sets of the show. This time, the photos also feature one of the participating contestants. Big B accompanied the photo album with a poem that he wrote after being inspired by poet Bhavani Prasad Mishra. His post read: "Ji haan huzoor, main kaam karta hoon, main tarah tarah ke kaam karta hoon, main kism kism ke kaam karta hoon. Kuch kaam kiye the maine masti main, kuch kiye praat-raat jabardasti mein. Ye KBC ki lat lagi hai, logo ko santusht karu bas yahi apeksha Sony ko. Shuruaat hui hai, abhi to din kuch baki hain, sneh aadar pyaar mile, to hum aabhari hain (Yes sir I work, I do different kinds of work, I do a variety of work. I did some work for fun, some I had done through day and night. Addicted to KBC, Sony only expects me to satisfy the audience. It has just started, more days are yet to come, If I receive affection and respect, I will be grateful)."

Amitabh Bachchan has been sharing updates from the sets of Kaun Banega Crorepati 12 since last month. The actor, who recovered from COVID-19 in August, started working on the new season in May but took a break after he was diagnosed with the coronavirus in July. He resumed the shoot last month and have been sharing glimpses of the new KBC set on social media since then. Take a look:

In terms of films, Amitabh Bachchan was last seen in Shoojit Sircar's Gulabo Sitabo, his first film to premiere on an OTT platform. The actor has a couple of films lined up like Ayan Mukerji's Brahmastra, which will also star Ranbir Kapoor and Alia Bhatt, and Nagraj Manjule's Jhund.