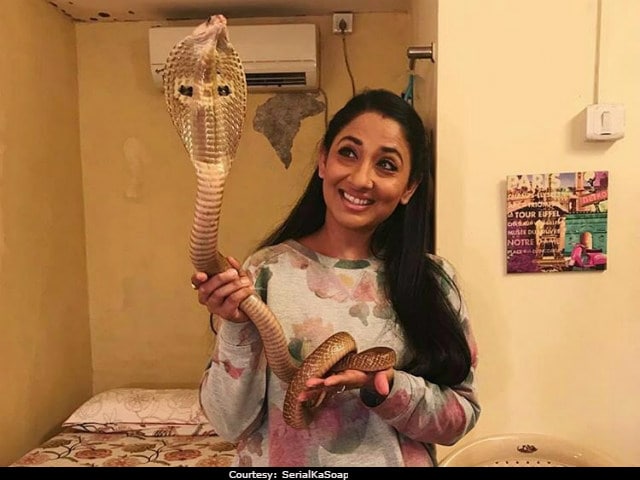 New Delhi: TV actress Shruti Ulfat was allegedly arrested by the Thane forest department on Wednesday, months after she posted videos and a picture of herself with a cobra, reported mid-day. Shruti was shooting for the mythological TV show Nagarjuna - Ek Yoddha, the team of which had allegedly procured the cobra. The show is set in the fantasy world of 'Naag Lok', a place which finds mention in the Puranas and Mahabharata. The producers of the show - Utkarsh Bali and Nitin Solanki - along with Pearl V Puri, the lead actor of Nagarjuna - Ek Yoddha, have also allegedly been taken into custody for posing with the cobra, reported mid-day. Santosh Kank, a Forest Range Officer, confirmed the arrest and said that the Nagarjuna - Ek Yoddha actors and producers are currently in custody because of the videos and pictures they shared on October 17 last year, reported mid-day. Shruti Ulfat featured as Yashodha Shastri in the fantasy TV series.

"We have arrested actress Shruti Ulfat along with three others for posing with a cobra and posting the images and videos online in October 2016. They were produced before the Borivli court and have been kept in custody of the Thane range. A CD with the images and videos was sent to the forensic lab and it has been proved that a live snake was used for shooting purposes," mid-day quoted Santosh Kank as saying.

The videos and pictures of the cobra attracted the attention of animal rights activist Sunish Subramanian Kanju, who allegedly filed a complaint with the Thane Forest Department, reported mid-day. "I was shocked to see pictures of a live cobra snake being handled by the actress. I personally feel that celebrities should avoid doing such things, as it sends out the wrong message to the public," mid-day quoted Mr Kanju as saying. According to mid-day, Mr Kanju, who is an active member of Mumbai NGO PAWS, also allegedly complained to the Wildlife Crime Control Bureau and the Principal Chief Conservator of Forests, Maharashtra.

Promoted
Listen to the latest songs, only on JioSaavn.com
Meanwhile, actress Pooja Bannerjee, who played the female lead Noorie Arjun Shastri on the show, said that the series has been stalled after January 13, reported mid-day. "There was an issue a long time ago, but no one had taken action at the time. Since the show ended, I have not been in touch with anyone and have no idea about the case," she told mid-day.

Shruti Ulfat has starred in films like Yeh Hai Mumbai Meri Jaan and Aetbaar. Mumkin and Thoda Hai Thode Ki Zaroorat Hai are some of her TV shows. She has a son with theatre personality Alok Ulfat.