Sapna Pabbi begins her post by revealing, "As an actress I often experience what Tanushree has experienced on almost a daily basis" 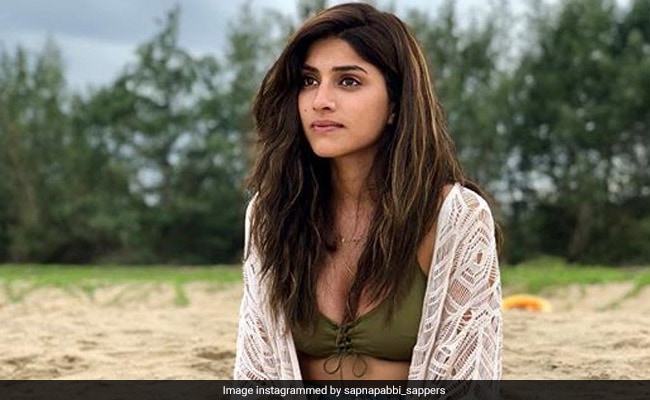 Actress Sapna Pabbi, best known for starring in the very popular web-series The Trip, recently revealed her own trauma while on set in an Instagram post titled 'I believe in Tanushree Dutta.' Ms Pabbi's story is singular because she points a finger not only at the men who behaved poorly but also the women who she says either colluded or failed to speak for her. Ms Pabbi's post, in which she writes particularly of a full day filming in an underwired bikini, calls out "the way some of these women have remained absent during such traumatic and difficult situations and were merely witnessing if not taking advantage themselves." Sapna Pabbi echoes a tweet posted by Raveena Tandon in response to the allegations of harassment made by Tanushree Dutta against Nana Patekar that are now consuming the film industry.

Sapna Pabbi begins her post by revealing, "As an actress I often experience what Tanushree has experienced on almost a daily basis" and that she has been left "heartbroken" by the way women on set have responded to male behaviour. "I've witnessed women from several professional industries (I've worked in a few) bully other women in order to secure their own position and accelerate their image in the eyes of their male peers," Ms Pabbi alleges.

Sapna Pabbi writes that she has several memories of turning towards another woman on set for support only to see her laughing at the allegedly sexist behaviour from a man experienced by Ms Pabbi. She writes in detail of an instance when she was asked to wear a bikini for a song sequence and reveals that she had requested that the underwire from the bikini top be removed as the shoot was to stretch for seven hours. Her request was turned down by the male director and, Sapni Pabbi writes, she endured chest pain caused by the wiring in the costume. The next day on set, she was allegedly told by the male producer, "It's just a bra, Sapna," and that her female stylist, with the male director and producer, had allegedly been ridiculing her as being difficult and demanding.

#ibelievetanushreedutta #hertoo These are my experiences, my thoughts, my opinions and my feelings. Just sharing

Being dismissed as "difficult" is a chilling reminder that Tanushree Dutta was also written off as being uncooperative and difficult when she walked off the set of a 2008 film after Nana Patekar allegedly harassed her. It was the official reason given by the film's producers for the stalling of the shoot, a female journalist who was on set that day recently revealed on Twitter.

That other women are complicit in this silencing of survivors of harassment and assault is not difficult to believe. Raveena Tandon, a leading actress in the Nineties and an active voice on social media, tweeted exactly this last week:

What defines harassment in a workplace?The fact that many industry wives/girlfriends are silent observers or instigators, when actor husbands destroy the actresses careers after the chase and flirtation is over,have them replaced with other potential targets?

Sapna Pabbi asks, "Where were all the women when this was happening?" At least two women - the journalist and another, then an assistant director on the film in question - have publicly backed part of Tanushree Dutta's version of events. Ms Dutta claims that Nana Patekar behaved aggressively and inappropriately during a song sequence and then called in political thugs to surround Ms Dutta's van and attack her car.

Tanushree Dutta recently received an apology from the film body she complained to then for not taking action. However, Mr Patekar and filmmaker Vivek Agnihotri - whom Ms Dutta has accused of sexist behaviour while filming 2005's Chocolate - have sent her legal notices demanding she apologise. A defamation case has also been filed against Ms Dutta by a member of Raj Thackeray's Maharashtra Navnirman Sena or MNS, the political outfit she claims the thugs who attacked her belonged to.

"This is the price you pay for speaking out against harassment, humiliation, and injustice in India," Ms Dutta said of the notices.