"Met him on the sets of Mumbai Diaries...We all used to chill in this room called 'actors lounge' built on set," wrote Satyajeet Dubey 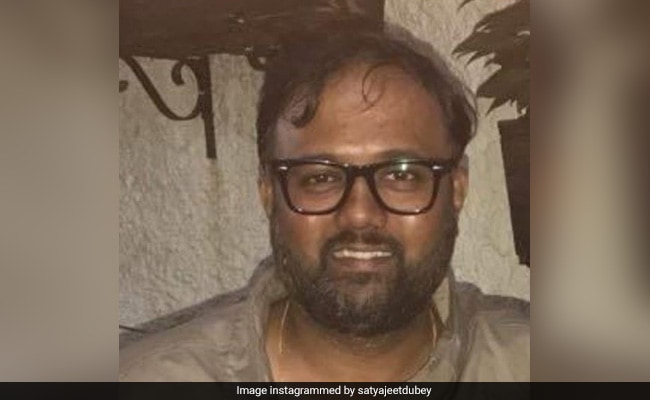 Prassthanam actor Satyajeet Dubey, on Wednesday, announced the death of his co-star, actor Tejas D Parvatkar, on his Instagram profile. Satyajeet Dubey shared a photograph of Mr Parvatkar, with whom he filmed the upcoming crime-thriller web-series Mumbai Diaries 26/11, and wrote: "Lost another co-star/friend today - Tejas D Parvatkar. A gentle soul, a guy who constantly spoke about his love for literature and his parla east stories, about plays and theatres, a big fan of PL Deshpande (a Marathi writer and actor). Met him on the sets of Mumbai Diaries, yet to release on Amazon Prime Video. We all used to chill in this room called 'actors lounge' built on set because the vans used to be a little far away... and dheere se awaz aati thi, 'Dubey saab, ahi shot mein time hai, chalo chai sutta break lete hain.' You will be missed, brother. Rest in peace." 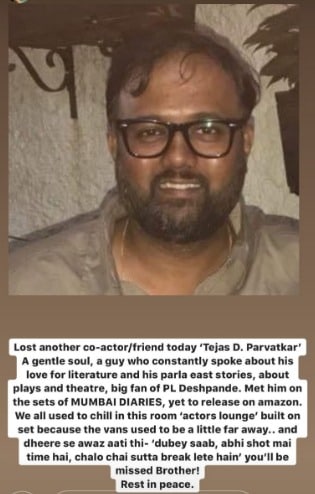 Tejas D Parvatkar was also a part of director Nikkhil Advani's web-series Mumbai Diaries 26/11, which is based on Mumbai terror attacks that happened in 2008. The series, which also stars Konkona Sen Sharma, Mohit Raina, Tina Desai, will soon stream on Prime Video.

Tejas D Parvatkar was known for his performance in the 2012 film Mumbai Cha Raja, which was directed by Manjeet Singh. He also featured in the 2004 film Hava Aney Dey and the 2014 film Sunrise, both of which were directed by Partho Sen-Gupta. Tejas D Parvatkar also served as the casting director for Irrfan Khan's 2005 film Dubai Return.