The actor revealed that his father had suffered a brain stroke earlier also but this time, a blood clot has formed Television actor Shoaib Ibrahim's father suffered a brain stroke earlier this week and is currently in the Intensive Care Unit (ICU) of a hospital. The actor, in his recent Instagram entries, shared updates on his father's health condition and said that he will stay in the ICU for the next two-three days. The actor also added that as per doctors, there's "nothing to worry about" as the nerve cells in his father's brain tissue were not damaged that much. The actor revealed that his father had suffered a brain stroke earlier also but this time, a blood clot has formed, which has led to "paralysis of left side" of his father's body. In his videos on Instagram stories, Shoaib Ibrahim also added that he isn't allowed to visit his father in the ICU frequently so he just gets to see his father's face every morning in the hospital.

The actor also asked his fans to pray for his father.

On Sunday, Shoaib Ibrahim shared a note on his Instagram story, informing his fans about his father's brain stroke. His note read: "Need your prayers and strength once again. Papa has had a brain stroke today morning and is in the ICU presently. Please please aap sab dua kijiyega ki allah unhe theek kar dein." His note was reshared by his wife and actress Dipika Kakar on her Instagram profile. 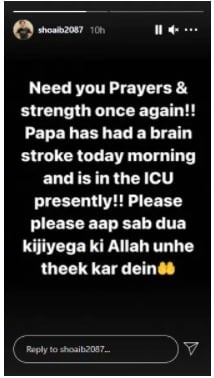 Dipika Kakar and Shoaib Ibrahim played the lead couple on television show Sasural Simar Ka from 2011 to 2013. They fell in love on the sets of the show and a couple of years later, got married in February 2018.

In terms of work, Dipika Kakar is best-known for her role Simar in the TV show Sasural Simar Ka. She was also seen with Shoaib in Nach Baliye. She made her debut in films with JP Dutta's Paltan while Shoaib's first Hindi movie Battalion 609. He has also starred in shows like Koi Laut Ke Aaya Hai and Rehna Hai Teri Palkon Ki Chhaon Mein.

"Stretch It Out" Like Power Couple Rubina Dilaik And Abhinav Shukla. See Pics