"Feeling elated to announce my engagement with my best friend," wrote the actor 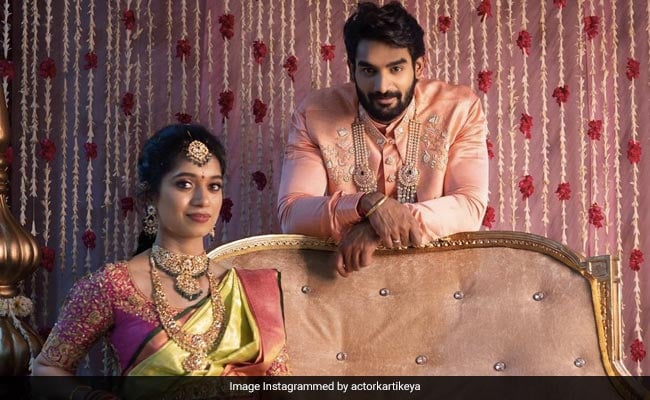 Telugu actor Kartikeya Gummakonda got engaged to his longtime girlfriend Lohitha Reddy in an intimate ceremony and he announced the news by sharing a picture from the ceremony on his Instagram profile. He also shared a throwback with his fiancée Lohitha from their college days. The couple reportedly got engaged in an intimate ceremony in Hyderabad and the wedding date has not been announced as of now. The two met in 2010 at NIT Warangal. He wrote in his caption: "Feeling elated to announce my engagement with my best friend who now is my partner for life. From 2010 when I first met Lohitha in NIT Warangal to now and many more such decades."

For the engagement ceremony, Kartikeya Gummakonda picked a n embroidered peach kurta. Lohitha Reddy looked stunning in a green and pink saree and she accentuated her look with gold jewelry. The comments section of Kartikeya's post was filled with congratulatory messages. "Congratulations Kartikeya, wish you both a happy, happy married life," his Chaavu Gaburu Challaga co-star Lavanya Tripathi's comment read. Bani J commented, "Big congratulations." Fans of the actor also flooded the comments section of his post with greetings for the couple.

Kartikeya Gummakonda is best-known for his performances in the film RX 100, which released in 2018. The actor made his acting debut with Prematho Mee Karthik (2017). He has featured in films like Hippi, Guna 369, Nani's Gang Leader and 90ML. On the work front, the actor has films like Raja Vikramarka and Valmail in the line-up.

Samantha Ruth Prabhu's Cinderella Moment. Guess The "Prince Charming" Who Has Her Shoe