"Sensitive Pilot": Arya Babbar Gets Into Heated Argument On Flight

Many users lauded Arya Babbar's video and recounted their bad experience. The issue was reportedly about a joke on flight. 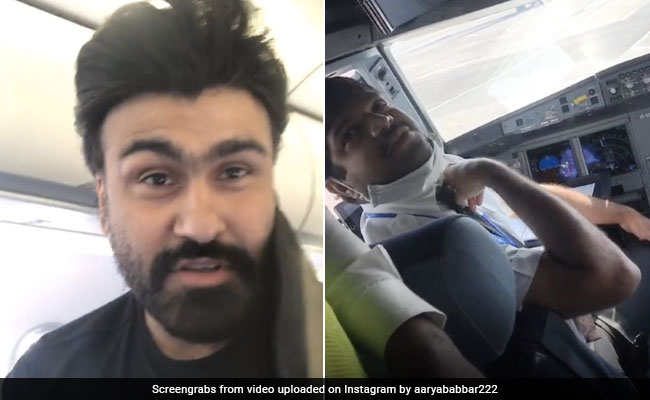 Aryan Babbar was on a GoFirst flight when the incident took place.

Actor-politician Raj Babbar's son Arya Babbar has shared a video of an incident on a flight where he got in a verbal spat with the pilot. The video, shared on his Instagram handle, shows the actor speaking to the pilot of GoFirst, formerly GoAir, about a joke.

The pilot is seen telling Babbar that he didn't like the joke in which the actor said the pilot is unfit to fly the aircraft.

Arya Babbar denied it and said the joke was intended for his friend.

“I heard you say ‘Yeh Kya chalayega (how will he fly the plane?)',” the pilot is heard telling the actor during the conversation that took place right outside the cockpit.

Babbar replied this is not what he told his friend and co-passenger. “I only told him ‘Bhai ye abhi aaye hai? (Did he just arrive?)'.” The actor then asks if the pilot doesn't want the people joking around.

He also accused the pilot of “showing your power” by calling him to the cockpit. “If you have a problem, you should have come to my seat,” Arya Babbar says in the video.

The actor asks the pilot if he wants him to get off the plane. The pilot replies he never told him this.

The pilot then extends his hand but Arya Babbar refused a handshake saying, "I don't wish to handshake with you. You wish to show your power and you want me to get up from my seat and come over here and talk to you when you have a problem."

Many users lauded Aryan Babbar and recounted their bad experience. Some of them, however, joked that he should never irk a pilot during a flight.