"Don't go by the happiness quotient of this picture because this is purely a BTS moment," wrote Taapsee Pannu 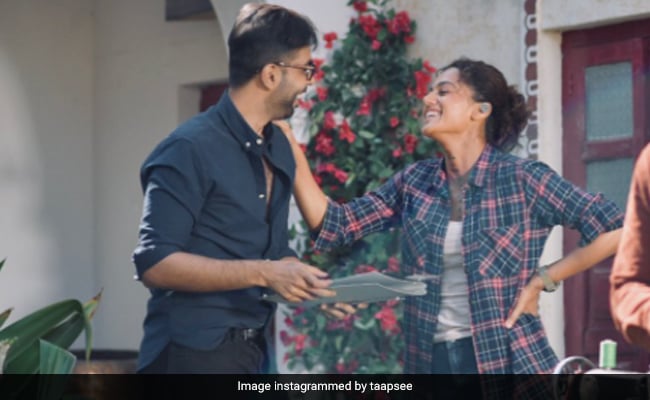 Taapsee Pannu, who is shooting for the last schedule of the sports film Rashmi Rocket in Bhuj, shared a BTS picture from the sets of the film on her Instagram profile on Tuesday. In the photo, the actress can be seen happily posing with her co-star Abhishek Banerjee, who is best-known for playing Hathoda Tyagi in the web-series Paatal Lok. Sharing the picture, Taapsee wrote: "Coz Rashmi had to take support of that shoulder at some point! But don't go by the happiness quotient of this picture because this is purely a BTS moment. Otherwise, I don't think Eeshit amuses Rashmi ever! PS _ Ab toh kisi picture mein cast kar le yaar Abhishek Banerjee ab toh tune live audition dekh liya hai mera."

Rashmi Rocket will showcase Rashmi's journey from a tiny village to athletic contests. The film will be directed by Akarsh Khurana and it will be co-produced by Ronnie Screwvala, Neha Anand and Pranjal Khandhdiya. Rashmi Rocket is expected to release sometime in 2021.

Taapsee Pannu's upcoming projects include Vinil Mathew's Haseen Dillruba also starring Vikrant Massey, and Shabaash Mithu, which will be based on the life of Indian women's cricket team captain Mithali Raj. Her line-up of films also includes Looop Lapeta, which is a Hindi remake of the German film Run Lola Run. The actress was last seen in Anubhav Sinha's critically acclaimed Thappad.