"Wow," was the general feeling on Aashka Goradia's pole dance video, which was showered with the fire and the heart-eyed emojis by her followers. 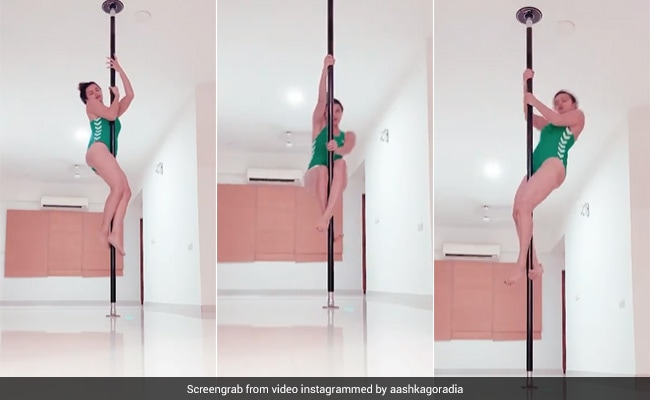 Aashka Goradia in a still from her video (courtesy aashkagoradia)

Aashka Goradia, who is known for being a fitness enthusiast, has professed her love for yet another form of work out. These days, Aashka Goradia is a fan of pole dancing as she is filling up her Instagram with glimpses from her studio sessions. On Tuesday, she added one more to the list and sent Instagram into a meltdown of sorts. The video is a simple snippet of Aashka Goradia perfecting her spinning skills on the pole - dressed in a green bodysuit, Aashka Goradia does a stunning job indeed, something which Mouni Roy summed up in a comment - she posted the red heart and the heart-eyed emojis. "Wow," was the general feeling on Aashka Goradia's pole dance video, which was showered with the fire and the heart-eyed emojis by her followers.

Earlier, Aashka Goradia left her Instafam in awe with this pole dance video, which she described with a quote attributed to poet Rumi: "We come spinning out of nothingness , scattering stars like dust."

Pole dance is like therapy to Aashka Goradia because here's what she wrote earlier: "Voices of the day...those of mine and others...disappear... they simply disappear when I am here."

Earlier this year, Aashka Goradia revealed in an interview that she has taken a break from acting and is living her life as an entrepreneur. Aashka Goradia owns a cosmetics brand named Renee Cosmetics and is also part of Peace Of Blue Yoga, which is owned by her husband. In terms of acting, Aashka Goradia was last seen in the 2019 TV serial Daayan. She has also participated in reality shows like Fear Factor: Khatron Ke Khiladi 4, Bigg Boss 6 and Nach Baliye 8.

Watch: Hina Khan Has The Funniest Take On Heartbreak