Aashka Goradia's Idea Of Weekend Goals - Pole Dancing In A Skirt. Mouni Roy Is A Fan

Aashka Goradia, who we have seen swirling on the pole in athleisure, picked a black skirt and a bra-let for her Saturday special pole dance video. 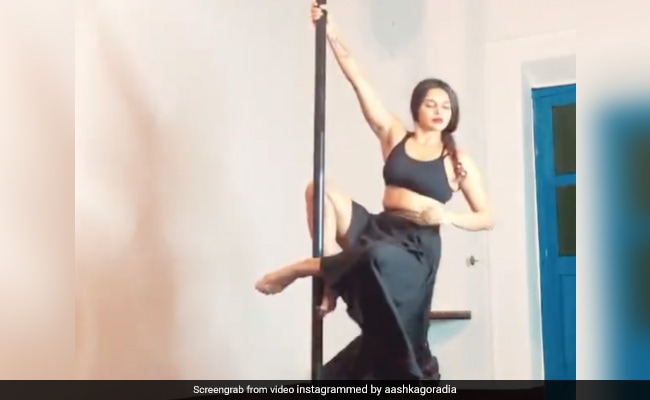 Aashka Goradia in a still from her video (courtesy aashkagoradia)

Believe us when we say that Aashka Goradia is setting major pole dancing goals, one post at a time. It's a Saturday, which means a new entry on Instagram from Aashka Goradia's pole dancing session - she kept her promise and upped the ante this time. Aashka Goradia, who we have seen swirling on the pole in athleisure, picked a black skirt and a bra-let for her Saturday special pole dance video. "Saturday be like," she wrote, sharing a glimpse of her idea of how to chill on a weekend. Describing herself as a femme fatale, Aashka Goradia wrote: "This black beauty heals me!" The actress set her video to the song Devil Devil by MILCK and the end result turned out to be fabulous.

We bet you won't be able to take your eyes off Aashka Goradia pole dancing in a skirt. As is trend, Mouni Roy cheered for Aashka in the comments section.

For one of her recent pole dance videos, Aashka Goradia wrote: "Get on it baby. Late evening sessions."

Here's when she opened up about missing her pole dancing sessions during the lockdown months: "When you truly have missed something so dearly... it just comes all multiplied and more. Yet never enough. For over a year of being away from practice, I am reunited. To the beginning of many swirls, spins, more strength and more training."

Aashka Goradia owns a cosmetics brand named Renee Cosmetics and is also part of Peace Of Blue Yoga, which is owned by her husband. In terms of acting, Aashka Goradia was last seen in the 2019 TV serial Daayan. She has also participated in reality shows like Fear Factor: Khatron Ke Khiladi 4, Bigg Boss 6 and Nach Baliye 8.