Aashka Goradia And Her Husband Set Instagram On Fire With A Kiss. See Pic 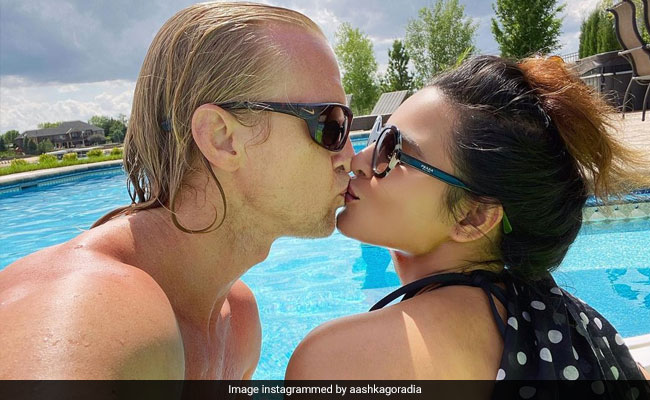 TV actress Aashka Goradia frequently steals the limelight on social media. We often get glimpses of Aashka's stunning beach pictures and PDA moments with her husband Brent Goble on her Instagram handle. On Thursday, the actress, who has been staying with Brent in the US, treated her fans to a loved-up picture of the couple on the platform. In the picture, Aashka and Brent can be seen kissing each other beside the swimming pool on a bright sunny day. Aashka looks gorgeous in her black-and-white polka dot swimming outfit. Brent is showing off his shirtless look in the frame.

Aashka's post also features a beautiful picture of a sunset view near West Shores Lake. In the series, we see a video as well in which Brent can be seen doing a backflip in the pool. In her caption, Aashka wrote, "Beautiful day." She used hashtags such as #perfectsky #beautifulday #sunny #warm #withmylove #today and #everyday.

Aashka Goradia is truly a water baby. In May, Aashka had posted a jaw-dropping picture of herself and her husband Brent on Instagram. In the picture, the couple can be seen performing yoga on the beach. Aashka looks super gorgeous in a yellow bikini and Brent is sporting green swimming trunks. The actress wrote a motivational note in her caption. "Take your financial matters in your hands. Get rich, stay rich. Get aligned, stay balanced," an excerpt from her post read.

Also take a look at some more pictures of Aashka Goradia from the beach.