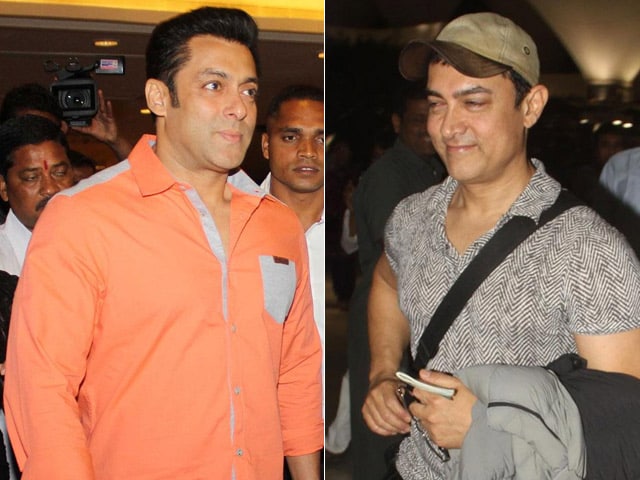 It seems that the Aamir Khan-Salman Khan friendship has taken a beating (Image courtesy: PlanetSRK)

New Delhi: Andaz apna apna, as they say. Aamir Khan will reportedly have to miss his old friend and collaborator Salman Khan's 51st birthday party later this month but for those attributing this to more sinister reasons (omigod, are Aamir and Salman no longer friends?), DNA reports that the Dangal actor has a celebration of his own scheduled. Aamir Khan, who is already 51, will reportedly be spending four days in Panchgani with his wife Kiran Rao, celebrating their 11th wedding anniversary. A source told DNA, "It's a special place for him and Kiran as they got married there. For his 11th anniversary he has planned something big. He has booked a couple of hotels in Panchgani for his friends who will drive down for the celebration. Also, there will be some musicians who perform at the bash. So, Aamir will miss Salman's party as he will be at his own party."

Aamir reportedly plans to be in Panchgani from December 26 to 29 and Salman's birthday is on December 27. The party venue will reportedly be the Khan property in Panvel and Shah Rukh Khan will apparently be there. Meantime, gossip suggests the Aamir-Salman friendship has taken a beating. This, still in the realm of rumour, appears to be based on the fact that Salman has tweeted about two SRK films - next month's Raees and the work-in-progress Imtiaz Ali film - but has been strangely silent about Aamir's film Dangal, which is out on December 23. Salman and SRK, co-stars from Karan Arjun, feuded bitterly for six years before mending their friendship in 2014, at Salman's sister Arpita's wedding.

Some days ago, Salman posted a tweet about the Imtiaz Ali film, saying that he had picked the release date and asking for suggestions for the movie title. The film, co-starring Anushka Sharma, has been known by the working title The Ring.

Promoted
Listen to the latest songs, only on JioSaavn.com
Last year, both Shah Rukh Khan and Aamir Khan helped Salman reveal the first look of his film Bajrangi Bhaijaan on Twitter.

Aamir Khan is currently prepping for the release of Dangal, in which he plays Haryanvi wrestler Mahavir Singh Phogat. The film is a true story of how Mr Phogat defied disapproval from his family and village to train his daughters Geeta and Babita into world-class wrestlers.