Aamir Khan Says He Made Dangal To Promote The Phogats, Not Himself 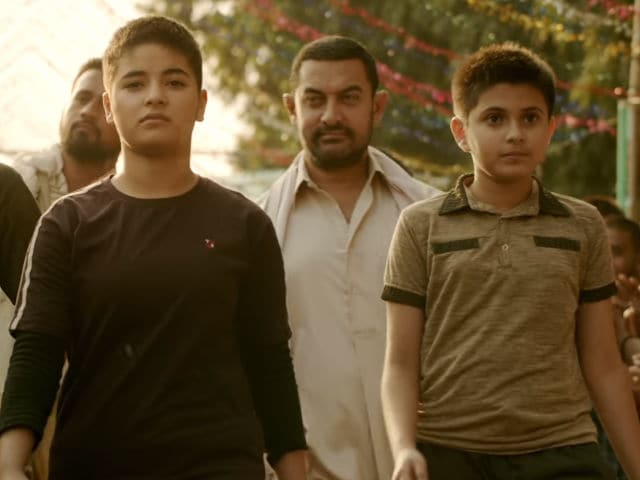 Aamir Khan in Dangal with Suhani Bhatnagar and Zaira Wasim

New Delhi: Actor Aamir Khan, weeks away from releasing his new film Dangal, says he made the film to promote the inspiring story of the Phogat family, reports news agency PTI. Dangal is the remarkable true tale of how wrestler Mahavir Singh Phogat defied patriarchal and gender-based notions in his small Haryanvi village to train his daughters Geeta and Babita in his sport. Geeta and Babita Phogat, two of India's most celebrated sporting heroes, won the country its first medals in female wrestling at the 2010 Commonwealth Games. "I knew about the Phogat family. I think the biggest way we could promote the Phogat sisters and Mahavir was by making a film on them. And that is what we have done," Aamir, 51, said in New Delhi on Thursday, reports PTI. Dangal stars Aamir Khan as Mahavir Phogat. Actresses Fatima Sana Sheikh and Sanya Malhotra play Geeta and Babita.

"After watching the film, hopefully people will appreciate them more perhaps. They will appreciate what the family has been through, the struggles, the achievements and the resilience that they have shown," Aamir Khan said. He also told the press that he didn't make Dangal out of self-interest. "My purpose to make this film was not to promote a sports personality or myself. When I am making a film it's because I love the story. It is because I am creatively excited about the film," Aamir said, reports PTI.


Dangal is 2016's second wrestling movie after Salman Khan's Sultan which released in July. Aamir says it was one of the two films of the year that he liked. "I don't watch too many films but I watched Sultan and I liked it. I watched Ae Dil Hai Mushkil as well and I really liked Ranbir's performance in it," Aamir Khan said.

Aamir has also revealed that he has been invited onto director Karan Johar's chat showKoffee With Karan and will appear with his Dangal daughters, Sana and Fatima.

Promoted
Listen to the latest songs, only on JioSaavn.com
Directed by Nitesh Tiwari, Dangal co-stars actress Sakshi Tanwar and releases on December 23. Aamir Khan claims that he has started smoking again out of nervousness.