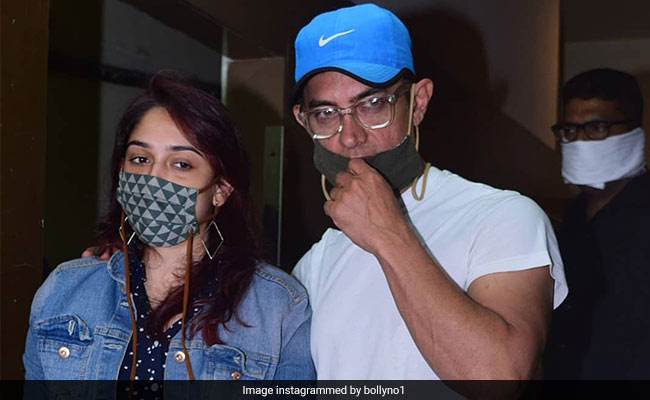 Guess who we recently spotted at a cinema hall in Mumbai? It was none other than superstar Aamir Khan, who stepped out on Tuesday night along with his daughter Ira Khan. The father-daughter duo watched the film Suraj Pe Mangal Bhari, starring Manoj Bajpayee, Diljit Dosanjh and Fatima Sana Shaikh in the lead roles. Aamir Khan and Ira opted for fairly casual outfits for their movie night. Ira opted for a denim-on-denim look, with a printed crop top, while Aamir Khan's pick was white tee and blue denims. Flashbulbs popped at them incessantly while exiting the theatre. Several fan pages shared the pictures from last night on social media.

Earlier on Tuesday, the actor shared a tweet, which read, "On my way to see Suraj Pe Mangal Bhari in a cinema hall. Really looking forward to the big screen experience, after so long!" The film released in theatres on November 15. It happens to be the first Bollywood film to have a theatrical release post the COVID-19 lockdown.

On my way to see Suraj Pe Mangal Bhari in a Cinema Hall. Really looking forward to the big screen experience, after so long !

Seems like Aamir Khan has been missing theatres and film screenings for a long time. Last month, after the trailer of Ludo released, Aamir Khan requested the film's director Anurag Basu to organise a special screening of the film for his colleagues. He tweeted, "What a trailer! Basu (film's director Anurag Basu), Hats off! Congratulations to the entire team. Can't wait to watch it. Kab tak wait karna padega? Basu, why don't you hold a virtual industry screening for some of your colleagues? Love, A."

Aamir Khan recently wrapped the schedule ofLaal Singh Chaddha, co-starring Kareena Kapoor. It is a remake of the 1994 film Forrest Gump, which featured Tom Hanks in the lead role. The film has been directed by Secret Superstar director Advait Chandan.