Shaheer Sheikh began the virtual tour of his home with a glimpse of his coffee corner which leads to a brightly lit up living space. 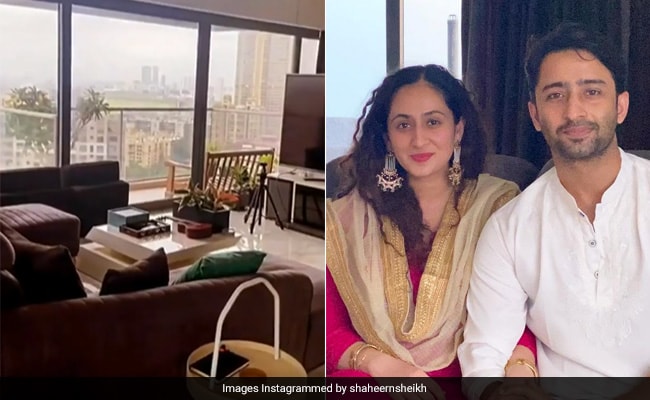 Television star Shaheer Sheikh opened the doors to his cozy Mumbai apartment to his fans recently - he offered a virtual tour of his home on his Instagram stories. Snippets from Shaheer Sheikh's home interiors have gone viral since then and been shared by fan clubs on Instagram. In his posts, Shaheer Sheikh revealed that he has done up the interiors of his Mumbai home with the hashtag "#InteriorsbySS". Shaheer Sheikh began the virtual tour of his home with a glimpse of his coffee corner which leads to a brightly lit up living space. Shaheer also showed his viewers around his open roof, which has a Jacuzzi. "Thoda sa aasman (little bit of the sky)," he wrote on his Instagram story.

Shaheer Sheikh moved the camera around his coffee bar and the dining space. However, it appears that the balcony of his residence is his favourite spot in the house. "The nest," Shaheer Sheikh captioned the Instagram story - the balcony offers a stunning view of the city skyline from the high rise. Shaheer Sheikh also walked into his aesthetically bedroom, which is done up in neutral tones and dramatic wall lighting.

Sheheer Sheikh is married to Ruchikaa Kapoor, who is the creative producer and executive vice president of Ekta Kapoor's production house Balaji Motion pictures. The couple, who got married in 2020, are currently expecting their first child together. Here are some more glimpses of their Mumbai home:

Shaheer Sheikh has been roped in as the male lead for Pavitra Rishta 2 - the role was originally played by actor Sushant Singh Rajput, who died last year. Shaheer Sheikh is known for starring in shows such as Navya..Naye Dhadkan Naye Sawaal, Kuch Rang Pyar Ke Aise Bhi and Yeh Rishtey Hain Pyaar Ke, among others.