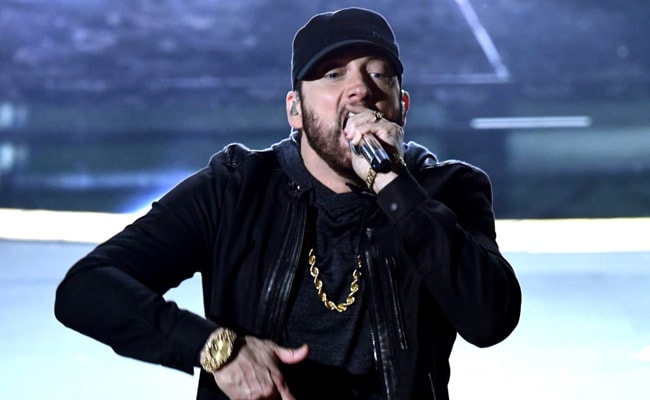 The 92nd Academy Awards witnessed some power-packed performances but the one that made Twitter go gaga was by... drumroll, please... Eminem. Yes, you read that right, Eminem had an Oscar gig - 18 years after he won an award. Jaws dropped when a montage of Oscar-winning songs (featuring Rahman's Jai Ho), introduced by Lin-Manuel Miranda, was succeeded by Eminem, live and in person, performed a rousing rendition of Lose Yourself - the song which won him an Oscar nearly two decades ago; jaws were quickly snapped back so as to rap along with Eminem - and literally every star in the room knew the words, we should tell you.

Twitter, quite naturally, was beside itself. Eminem trended for a quite a while, no mean feat for a musician at a film event. He received a standing ovation at the Oscars, and on social media as well.

Several GIFS were spotted, while one tweet simply referred to his gig as the "biggest event of the century."

Everyone when #Eminem comes out during the #Oscarspic.twitter.com/Q10KLfiXyW

THE RAP GOD #Eminem with the standing ovation #Oscarspic.twitter.com/762rjEyil5

Eminem attended the Oscars, 18 years after winning an Academy Award and the Internet definitely remembered that.

After 18 years of winning an Oscar.
Look who's back. ( not literally cause he didn't showed up in 03 )
Eminem freaking killed it
Standing ovation #eminem#Oscar2020pic.twitter.com/9tujOGsfgp

A fan described the rapper's performance as the "biggest event of the century."

#Eminem didn't attend Oscars when he won first Oscar for Hiphop genre and 18 years later performs his one the most iconic Oscar winning song "Lose Yourself" at #Oscars is the biggest event of the century pic.twitter.com/fbdSDca5SQ

Remember when we said, "Twitter can't keep calm."Well, this is exactly what we were talking about:

Eminem at the #Oscars that's all thats the whole tweet #Oscars#Eminempic.twitter.com/FIMMxdvVMC

Eminem, real name Marshall Mathers, shared a snippet from his 2003 Academy Award win - he didn't attend then - and tweeted: "Look, if you had another shot, another opportunity... Thanks for having me Academy. Sorry, it took me 18 years to get here."

Look, if you had another shot, another opportunity... Thanks for having me @TheAcademy. Sorry it took me 18 years to get here. pic.twitter.com/CmSw2hmcZo

Lose Yourself, one of the rapper's best-known songs, belongs to the soundtrack of 8 Mile, the autobiographical film that follows Eminem's breakthrough into rap, a genre dominated by African-American musicians.

To sum it up - one can love or hate Eminem, but as his performance at the 92nd Academy Awards proves, there's no ignoring him.