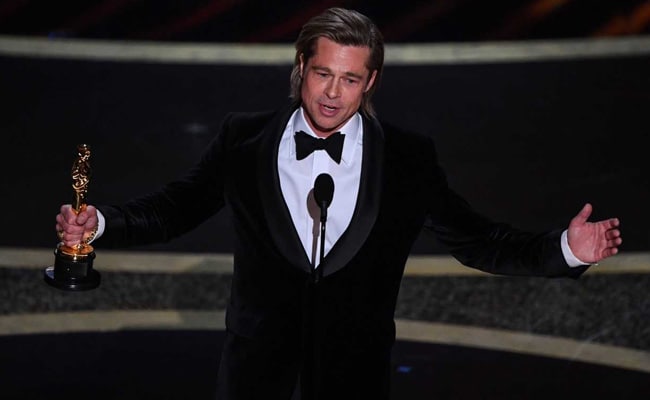 The 92nd Academy Awards left us with several memorable speeches, from Brad Pitt mocking Donald Trump's impeachment to Joaquin Phoenix's emotional monologue to Parasite's history-making director Bong Joon-ho's endearing drinking joke. Brad Pitt, who has had Hollywood chuckling at his 'marriage story' and 'singlehood' at previous award shows, cracked up the audience at the Oscars also as he received his Best Supporting Actor award for Once Upon A Time... In Hollywood. The humour came in the form of a direct political joke with a quick reference to Donald Trump's impeachment trial. "They told me I only have 45 seconds up here, which is 45 seconds more than the Senate gave John Bolton this week," he said - John Bolton, Mr Trump's former security advisor, offered to testify before the Senate. Brad added: "I'm thinking maybe Quentin does a movie about it. In the end, the adults do the right thing."

Earlier at the BAFTAs, Brad Pitt joked about his failed marriages, comparing his single-status to UK's exit from European Union as Brexit came into force recently: "Hi Britain, heard you just became single. Welcome to the club. Wishing you the best with the divorce settlement... blah blah blah."

Give a big round of applause for Brad Pitt. He also told his co-star and Best Actor nominee Leonardo DiCaprio: "Leo, I'd ride on your coat-tails any day. The view is fantastic." Brad Pitt dedicated his award to his children: "This is for my kids, who colour everything I do. I admire you." Brad Pitt has six children with estranged wife Angelina Jolie.

Renee Zellweger won the Best Actress Oscar for her performance in biographical film Judy. She was handed the Oscar by last year's Best Actor winner Rami Malek, and thanked her fellow nominees in her speech: "Thank you to the Academy. Thank you for inviting me here alongside one of the most special collaborations and meaningful experiences of my life. I have said it before and I'll say it again. Cynthia (Erivo), Scarlett (Johansson), Charlize (Theron), Saoirse (Ronan)... have to say it is an honour to be considered in your company."

Meanwhile, Best Actor Oscar winner Joaquin Phoenix, whose awkward but powerful Golden Globes speech will be remembered for a long time, began by saying: "I do not feel elevated above any of my fellow nominees or anyone in this room because we share the same love, the love of film. This form of expression has given me the most extraordinary life." Joaquin Phoenix won for Joker.

However, he made it a point to up include some pressing issues in his speech: "I have been thinking a lot about some of the distressing issues that we are facing collectively. And I think at times, we feel or made it feel that we championed different causes. But for me, I see commonality. I think, whether we are talking about gender and equality or racism of queer rights or animal rights, we are talking about the fight against injustice."

South Korean filmmaker Bong Joon-ho made history - social satire Parasite not only won the Best Picture Oscar, but also Best Director, Best International Feature and Best Original Screenplay. Having promised to have a drink in his first two speeches for the Best International Feature and Best Original Screenplay wins, Bong Joon-ho gamely kept at it while accepting his Oscar for directing. He also singled gave fellow nominees Martin Scorsese and Quentin Tarantino shout-outs: "When I was in school, I studied Martin Scorsese's films. Just to be nominated is an honour. I never thought I would win. When people in the US were not familiar with my films, Quentin always put my film on his list. He's here, 'I love you Quentin'. If the Academy allows, I would like to get a Texas chainsaw, split the Oscar trophy into five and share it with all of you. Thank you, I will drink until next morning."

Laura Dern, who won Best Supporting Actress for Netflix film Marriage Story, paid a heart-felt tribute to her parents, actors Bruce Dern and Diane Ladd, who broke down during her acceptance speech. "Some say never meet your heroes, but I say, if you are really blessed, you get them as your parents. I share this with my acting heroes, my legends, Diane Ladd and Bruce Dern," she said and added: "This is the best birthday present ever." Laura Dern celebrates her 53rd birthday on February 10.

The Oscars wrapped with Team Parasite thanking their director Bong Joon-ho for taking a leap of faith: