5 Weddings Movie Review: What On Earth Is Gifted Rajkummar Rao Doing In This Film?

5 Weddings Movie Review: It's anything but a happy marriage of style and content. On both crucial fronts, it's left scrounging for inspiration. 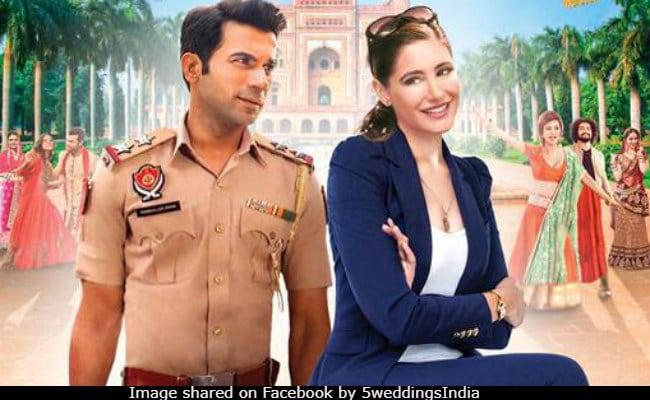 Big fat Indian weddings are over-hyped, over-exposed affairs in popular culture thanks to bloated - and repeated - Bollywood renditions. They are the worst thing that an Indian-American filmmaker can single out as a marker of her ethnic roots. So it is for Los Angeles-based fashion journo Shania Dhaliwal (Nargis Fakhri), the female protagonist of Namrata Singh Gujral's first directorial feature, 5 Weddings, an inert comedy of manners done in by a pedestrian premise.

Shania, driven by the dwindling fortunes of the media platform she works for and the ambition to be installed as its editor-in-chief, jets it to Chandigarh for a feature on Punjab's nuptial mores. Her 'overseas' assignment opens the sluice gates for a bunch of trite tropes built around a confused American desi groping for clues that could help her wrap her head around the bewildering bundle of contradictions that is India.

Shania makes no bones about the fact that she hates both India and ostentatious weddings in no particular order, but she is on a personal mission as well. At the behest of her American mom (Bo Derek), she is looking for her father. Does this search give 5 Weddings a sense of purpose over and above the skin-deep one that is obvious to everybody? No way. The film's meaningless meanderings last a touch over an hour and a half, but they feel like an eternity because they appear so pointless.

For no explicable reason, a Chandigarh police inspector, Harbhajan Singh (Rajkummar Rao), is given the job of her escort her around so that she causes no trouble. But while she attends various ceremonies at five different weddings, the cop in tow, it isn't the brides and grooms as much as the dancing eunuchs who, she figures out, are an integral part of the marriage rituals.

She zeroes in on one of them - the focus on the community of transgenders is this rusty rom-com's way of laying claims to a modicum of serious-mindedness - arousing the suspicions of the local authorities. But do not ask why or how her seeking out a hijra and wanting to learn more about her ilk would endanger India. 5 Weddings does not have a plausible answer.

Another big question that one cannot help asking pertains to Rajkummar Rao's presence in 5 Weddings. What on earth is this gifted actor doing in such a flimsy culture clash drama? Not that he does not pull his weight, but so shallow is the material that he is expected breathe life into that nothing he does can lift the film out of its comatose state and lend it a genuine spark.

Nargis Fakhri, deliver her lines in her own voice for once, does a fair job of looking lost in a setting that is alien to her. But she contributes nothing beyond that to the drama of a girl looking for her father and seeking to reconnect with the land of her birth from which she has drifted away completely.

Weighed down by a sloppy, cliche-ridden script (written by Denise Cruz-Castino, Andy Glickman and Namrata Singh Gujral), the film suffers from lack of real humour. Its attempts to raise laughs are feeble and fall flat more often than not. Some mirth is supposed to emanate from the antics of the cop's driver - named Donald (Ravi Aneja), he speaks a brand of English that is meant to be funny. All he does is aggravate the all-round insipidity a cinematic exercise that should have stopped short of the entrance of the wedding shamiana.

To sum up, 5 Weddings is anything but a happy marriage of style and content. On both crucial fronts, it is left scrounging for inspiration. The only thing it does with any degree of authority is skim the surface of a genre that has been done to death. With absolutely nothing textually new or texturally fresh on offer, it's down for the count from the word go.

5 Weddings flails and flounders without a straw of hope to clutch at. Let it sink.