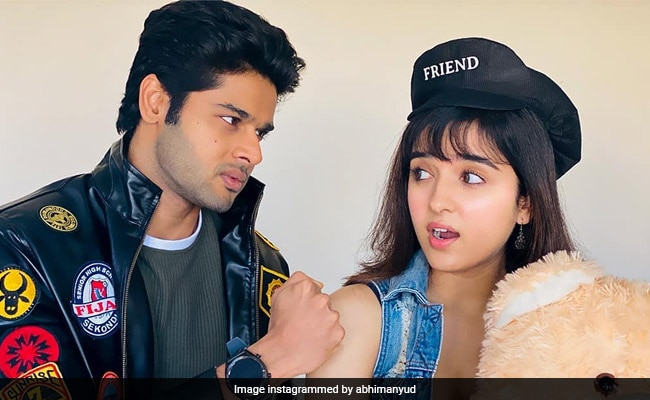 The iconic film Maine Pyar Kiya, which starred Salman Khan and Bhagyashree in the lead roles, clocked 30 years on Sunday. The film resonates with today's generation through its iconic scenes and dialogues and that clearly reflects on social media. On Twitter, the hashtag #30YearsOfMainePyarKiya has been trending incessantly. In order to mark the occasion, the film's lead actress' son Abhimanyu Dasani recreated some of the most iconic scenes from the film and he has been trending for it big time. Abhimanyu shared a video, in which he and his friend can be seen recreating the popular "Dosti ka ek asool hai madam, no sorry no thank you" dialogue.

Sharing the video on his Instagram profile, the Mard Ko Dard Nahi Hota actor wrote: "Don't kill me I had to try. Salman Khan and Bhagyashree taught us real friendship.Who can forget this iconic scene from this timeless movie! Come be a part of the celebration of 30 years of Maine Pyar Kiya."

Don't kill me I had to try They taught us real friendship @beingsalmankhan @bhagyashree.online Who can forget this iconic scene from this timeless movie! Come be a part of the celebration of #30YearsOfMainePyarKiya. Send me your versions of this scene and I'll share the best ones. #Nikamma @shirleysetia @theshilpashetty @sabbir24x7 @skfilmsofficial @sonypicturesin @rajshrifilms @mohnish_bahl @bhagyashree.online #tiktok #india #bollywood

In a separate post, Abhimanyu wrote: "An ode to keep the legacy going! Stay tuned for something special guys. Celebrating 30 years of Maine Pyar Kiya."