2.0: Rajinikanth And Akshay Kumar's Film Gets A Release Date In China

2.0 is touted to be one of the most expensive Indian films made in 3D format 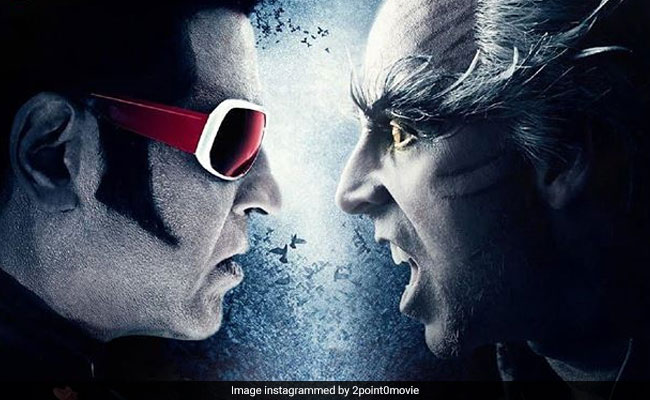 2.0, which features superstar Rajinikanth and Akshay Kumar, is all set to release in China on July 12. The multi-lingual film is the sequel to 2010 film Enthiran. However, it is separate from the events of Enthiran. Announcing the film's release date, Akshay Kumar tweeted: "Get ready for the ultimate face-off, 2.0 releasing in China this July 12, 2019!" In 2.0, Akshay Kumar starred as main villain Dr Richards while Rajinikanth played the protagonist, who is the saviour of mankind facing the ornithologist's wrath. The S Shankar-directed film, which released in India on November 29 last year, also stars Amy Jackson, Adil Hussain and Sudhanshu Panday in pivotal roles.

Get ready for the ultimate face-off, 2.0 releasing in China this July 12, 2019! #2Point0InChinapic.twitter.com/Ozw2F4y7Mb

2.0 is touted to be one of the most expensive Indian films made in 3D format. It was reportedly made on a budget of over Rs 500 crore. The film was produced by Allirajah Subaskaran under the banner of Lyca Productions. Over the film's format, Lyca Productions had said: "We wanted to make a film that would not just give people value for money, but also a great movie-going experience! We carefully shot and designed the 3D in 2.0 to give audience the best 3D experience."

2.0 received great response at the box office. The film reportedly earned around Rs 520 crore worldwide. It successfully crossed the Rs 500 crore mark worldwide at the end of the first week.

For those who don't know, Rajnikanth and Akshay Kumar co-starred for the first time in 2.0. However, in 2007 film Bhool Bhulaiya, Akshay played the role Rajinikanth portrayed in original 2005 film Chandramukhi.