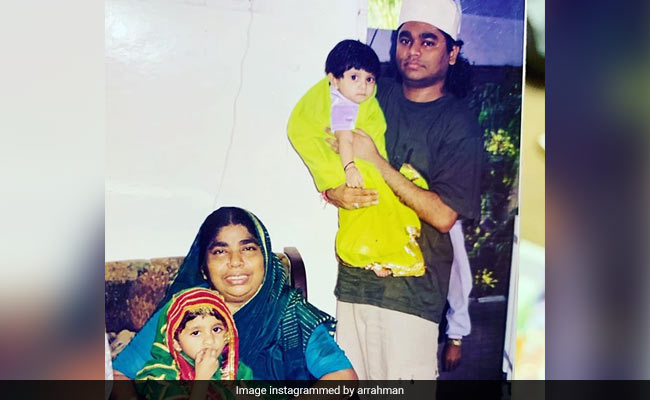 AR Rahman just signed up for Team I-love-throwback-photos on Instagram as he gave us major nostalgia with a memory from his family archives. AR Rahman stirred up his memories from 18 years ago and zeroed in on an adorable photo of himself with his mother and two daughters - Khatija and Raheema - who were much younger then. "18 years back with mom and my two little girls," captioned AR Rahman. In the photo, AR Rahman can be seen posing with one of his daughters while his mother keeps the other company in the frame. AR Rahman and Saira Banu married in 1997 are they are also parents to a son named Ameen.

18years back with mom and my two little girls

Earlier this year, the National Award-winning composer remained busy with Hollywood award galas and took along daughter Raheema as his plus one to the Grammys. He filled up his Instagram with Grammy-special moments with Raheema featuring in some of them.

Earlier this year, AR Rahman was criticised for allegedly forcing his daughter Khatija to wear a niqaab to an event, when he set the record straight with a post and a telling hashtag that said: "Freedom to choose." Soon after, AR Rahman introduced his daughters and a son on his Instagram with a click from a photoshoot for Hello Magazine with Khatija posing in a niqaab.

In 2010, AR Rahman struck double gold at the Grammys with two wins for Slumdog Millionaire. He also won two Oscars for the film. AR Rahman's legacy of awards includes six National Awards and several Filmfare Awards from across Bollywood and the South film industry. He was honoured with the Padma Shri in 2000 and Padma Bhushan in 2010 for his contribution to Indian music and cinema.