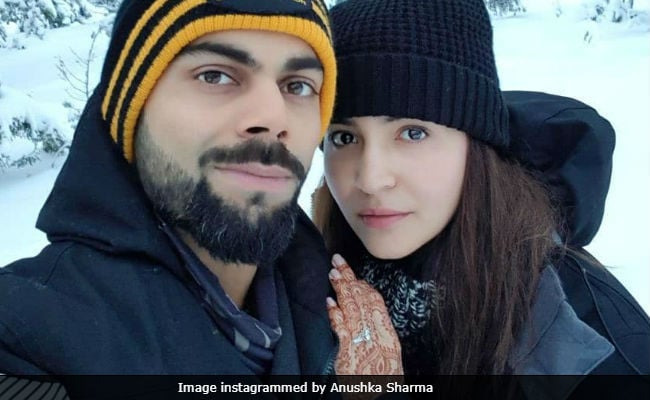 New Delhi: Before we bid adieu to 2017, let's not forget that the year was a year of crazy viral photos, wasn't it? On New Year's eve, here's a review of the year 2017, through the photos which sent the Internet into somewhat of a meltdown. Well, no points for guessing which one tops the list - it's the one with which the big fat wedding of the year - Virushka's shaadi - was announced. Virat Kohli's wedding tweet takes the crown for 2017's Golden Tweet Of The Year while Anushka Sharma's shaadi photo is also one of the most re-tweeted ones. That's not it, the couple also shared a honeymoon selfie from a secret winter wonderland, which also sent the Internet into a tizzy.

Anushka and Virat are touring South Africa now, but they are guilty of sending netizens in a tizzy when they simultaneously shared wedding photos on December 11. Virat's tweet currently has over 91,261 re-tweets while Anushka's post has been re-tweeted over 59,076 times. Virat's post has been 'liked' over 545,620 times and Anushka's 389,000 times - both mind-boggling numbers.

Today we have promised each other to be bound in love for ever. We are truly blessed to share the news with you.This beautiful day will be made more special with the love and support of our family of fans & well wishers. Thank you for being such an important part of our journey. pic.twitter.com/aobTUwMNAK

Wedding-shedding done, Anushka shared a honeymoon selfie from a winter wonderland and within minutes of being posted, the picture went viral - it had over two lakh likes in the first 20 minutes itself. Currently, it has over 35 lakh 'likes'.

Earlier this year, Priyanka Chopra met Prime Minister Narendra Modi in Berlin and posted photos of her meet on social media, saying: "Thank you for taking the time to meet me. Such a coincidence to be in Berlin at the same time." Priyanka's photos trended for more than one reasons - apart from the fact that she met PM Modi, she was trolled for wearing a short dress to the meeting. Priyanka being Priyanka, knew just how to shut the trolls - in what appeared to be a response, she shared a photo with her mother, both in short-length outfits - writing "It's the genes."

Thank you for taking the time to meet me this morning @narendramodi Sir. Such a lovely coincidence to be in #berlin at the same time. pic.twitter.com/vLzUSH5WR1

On December 20, 2016 Saif Ali Khan and Kareena Kapoor welcomed Taimur, who is now a social media star! Within weeks, a photo of the little one that was Saif's display photo on WhatsApp was accessed and circulated online and went crazy viral. Now, Taimur, rules the social media accounts of many of the Kapoors, including masi Karisma. Taimur celebrated his first birthday in December this year.

Good To See You, Madhavan:

In June this year, R Madhavan sent the Internet into frenzy. He has reportedly lost some 11 kilos in the recent past and posted a casual morning selfie sporting unkempt hair and a salt-and-pepper beard. Fans unabashedly swooned over the 47-year-old actor and his new look, making his selfie go crazy viral. A week later, Madhavan made a confession in his interview to PTI: "Now I'm a little embarrassed and under pressure because I don't look like that all the time and I am trying to see if I can be accepted again as a normal-looking guy."

Beyonce's pregnancy announcement post on Instagram will be remembered for a long time. In February, the pop queen posted a rather dramatic photo of herself revealing her baby bump. It was to announce she's expecting twins with her rapper husband Jay-Z. The couple, who are parents to five-year-old daughter named Blue Ivy, welcomed twins in June, who they named Rumi and Sir.

We would like to share our love and happiness. We have been blessed two times over. We are incredibly grateful that our family will be growing by two, and we thank you for your well wishes. - The Carters

Britain's Prince Harry and American actress Meghan Markle are engaged to be married now, yes, that's true. But ahead of their big announcement and any confirmation of the dating rumours, the duo trended a great deal after they made their first public appearance together in September. The couple were spotted holding hands at the Invictus Games in Toronto.

How Kylie Jenner Broke The Internet:

Remember Kylie Jenner's washroom selfie from the Met Gala 2017? The youngest Kardashian roped in Kendall and Kim Kardashian and many, many more celebs for what she called the "annual bathroom selfie." The viral photo currently has over 3,489,380 'likes'.

Mahira And Ranbir Spotted In New York: Mahira Khan and Ranbir Kapoor also trended a great deal this year and so did their viral photos. Mahira and Ranbir, who are rumoured to be dating, were spotted outside a New York hotel earlier this year and photos of the two went viral on social media. Mahira, who can be seen wearing a short dress and smoking in the pictures, was subjected to ruthless trolling for the photos, which haters deemed as "indecent."

Promoted
Listen to the latest songs, only on JioSaavn.com
Last but not the least is Katrina's throwback photo with Gaddafi. The photo was originally shared on Instagram by former model Shamita Singha, who deleted the post after being criticized for describing the meeting with Gaddafi as a 'privilege' in her caption. The picture dates from almost 15 years ago, when Katrina and her companions were in Libya for a fashion show. Katrina was likely just 18 then and still a year or so away from making her debut as an actress in filmmaker Kaizad Gustad's 2003 film Boom.

Do you think New Year 2018 will have more viral-worthy photos in store for us? Tell us in the comments below.