On their official website, BTS describes the band's name as an acronym for the Korean term Bangtan Sonyeondan, which translated into English means "Beyond the scene." 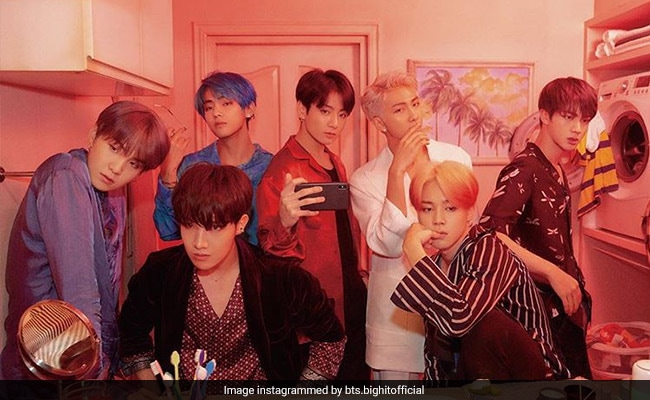 BTS is the one stop for the K-Pop soul music you are looking for. The seven-member boy band spoke to NDTV's Rohit Khilnani in an exclusive interview. BTS, comprising RM, Jin, Suga, J-Hope, Jimin, V and Jungkook, was formed in 2013, the year they launched their first single. In seven years, the South Korean band has redefined global domination and how. After a brilliant run on home turf in South Korea, BTS crossed over to the international music scenario in 2017. From featuring as "Next Generation Leaders" on a Time Magazine cover, BTS made it to the Time 100 list last year. BTS' latest album will drop on November 20. For those who need catching up on BTS, here's some interesting trivia about one of the world's most popular bands. Enjoy.

On their official website, BTS describes the band's name as an acronym for the Korean term Bangtan Sonyeondan, which translated into English means "Beyond the scene." The band initially described themselves as "Bulletproof Boy Scouts," which they later changed in 2017.

BTS front man RM, who is the most well-versed in English of the seven band members, told Ellen DeGeneres in 2017 that he learnt English as a teenager simply by watching F.R.I.E.N.D.S. Isn't that cool?

# Meet BTS, The Only K-POP Band To Have Personalised Twitter Emojis

In 2016, BTS got its own Twitter emoji based on their logo - a bulletproof vest. The boy band's was also reportedly the first Korean Twitter profile to garner 10 million followers. In 2017, they also got a second Twitter emoji when their big announcement that they will be performing the song DNA at the American Music Awards set the Internet on fire.

#BTS has its own Twitter emoji! 5 countries with the most amount of tweets will get their own special video message! pic.twitter.com/px85Ud8RDW

# Did You Know BTS Has The Most Commented On Music Video?

A report in Forbes, published earlier this year, stated that the BTS music video DNA became the most commented on YouTube video after taking over from Psy's Gangnam Style, which has over 5 million comments till date. Released in 2017, DNA has over 6.3 million comments as of October third week.

BTS' 2020 album Map Of The Soul: 7, released earlier this year, is a massive hit worldwide. Apart from charting on Billboard Hot 200, three songs from the album - Filter, On and Me Time ranked on the Billboard Hot 100. In doing so, the total is a whopping 11-time feature on Billboard Hot 100. Forbes reports that till date, six Korean Pop artists have featured on the list with 11 singles in total collectively, which BTS alone has matched in just a few years since their inception.

# BTS Leaves A Mark In The South Korean Economy

Last year, BTS featured on Forbes 100 Celeb List as one of world's top earning celeb conglomerates. BTS reportedly attracts one in every 13 tourists visiting South Korea, in turn boosting the overall economy. According to a Daily Mail report in 2018, BTS generated as much as $3.63 billion, majorly contributing to the South Korean economy.

# How BTS Is Changing The Social Scenario - They Are Philanthropists Too

BTS launched the anti-violence campaign Love Myself in collaboration with UNICEF in 2017. In two years, the campaign garnered reportedly over $ 2.4 million. Apart from the Love Myself Campaign, BTS made major contributions to the Sewol Ferry disaster relief in 2014 and the following year, the group donated 7,187 kg rice to the K-Star Road opening ceremony held in Apgujeong-dong, a ward in Seoul. This year, BTS contributed to the Black Lives Matter campaign and also supported a cause to aid music artists during the pandemic.

The fandom of BTS is referred to as BTS A.R.M.Y, an acronym decided by the pop group themselves, which basically stands for Adorable Representative M.C. for Youth. Their logo of a bulletproof vest is symbolic of the acronym A.R.M.Y. It was officially coined in 2013 during the band's inception.

# ICYMI: These Celebs Have Signed Up For BTS A.R.M.Y

Which is your favourite BTS song or album? Tell us in the comments below.