Vote for us, will check 'misuse' of anti-rape law, says Mulayam's manifesto 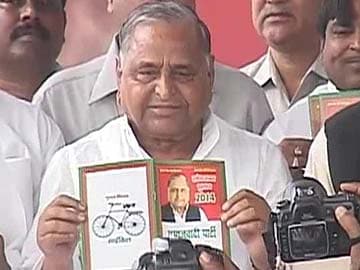 Lucknow: Mulayam Singh Yadav believes that voters should pick his Samajwadi Party because it will fight to check "the large-scale misuse" of the tougher anti-rape law introduced after the fatal gang-rape of a young woman on a moving bus in Delhi. His commitment was made in his party manifesto which was released today.

Archaic laws were over-hauled after that crime incensed India in December 2012. Convicts can get the death penalty for sexual crimes if the victim dies. For egregious cases, a life sentence will be imposed. Fast-track courts have been set up to deal with sexual crimes. The trial for the convicts in the Delhi gang-rape case was completed in nine months; recently, a Mumbai court completed its trial for the gang accused of raping a photojournalist in the heart of the city in five months.

When the new laws were proposed in Parliament, Mulayam Singh Yadav's party had objected to features including stalking being made a criminal offence, arguing that they could be twisted to implicate men in fake case.

Promoted
Listen to the latest songs, only on JioSaavn.com
"There is a large scale misuse of laws including anti-dowry, SC/ST (atrocities prevention) act and the new anti-rape law that came into existence after 'Nirbhaya' rape case...SP is in favour of implementing them strictly and at the same time will initiate strict action against those misusing them," the party's manifesto said, adding that the laws are currently being misused without elaborating how.