Rajnath Singh: 'Wily' Thakur from UP who wants to appropriate Vajpayee's legacy 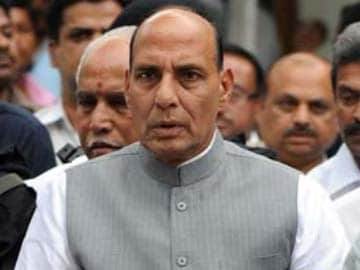 New Delhi: BJP president Rajnath Singh, the joke in the party goes, does not take a single step without the advice of his resident-astrologer.

Few people would have given him the chance of becoming the party president in December, 2005, fewer still would have predicted a second stint in January, 2013, when he was catapulted to the post by default, after Nitin Gadkari's dubious investments in the Purti group of companies came to light, and was forced to drop out. (Nitin Gadkari questioned by Income Tax officials)

But Mr Singh's close ties with the Rashtriya Swayamsevak Sangh, or the RSS, ensured that he was back at the party's helm last year. His astrologer was not surprised at all. The Thakur from Uttar Pradesh, he feels, is destined for bigger things.

Mr Singh's supporters have faith in his abilities, and in his astrological stars. That probable explains his decision to shift from the Ghaziabad parliamentary constituency, which he won in 2009, to Lucknow, the constituency represented by Atal Bihari Vajpayee in the Lok Sabha five times, thrice as the prime minister. The change in constituency is deliberate, and symbolic. (Read)

Mr Vajpayee's candidature was embraced by all sections of the society in the Uttar Pradesh capital. Mr Singh feels he is the best person in the party to carry forward the former prime minister's legacy.

Born to a farmer's family at Babhaura village in Chandauli district on July 10, 1951, Mr Singh completed his M.Sc. in Physics from the Gorakhpur University. He became a lecturer in Physics in a Mirzapur college, but dumped the job soon after to enter politics in 1974, when Indira Gandhi was the prime minister. (Full coverage: Elections)

He became an MLA for the first time in 1977, in the first election to be held in his state after emergency. But he contested his next election over two decades later, after he became the chief minister of Uttar Pradesh in 2000. He persuaded a Congress MLA, Surendra Nath Awasthi, popularly known as Puttu Awasthi, to vacate his Haidergarh seat for him.

Mr Singh won the by-election held soon after, and retained the seat in the assembly polls two years later.

Mr Singh won from Haidergarh in 2002, but his party was pushed to the third spot behind Samajwadi Party and the Bahujan Samaj Party in the assembly polls. The BJP decided to back the BSP's Mayawati for the chief minister's post. Mr Singh was inducted as the agriculture minister in the Atal Bihari Vajpayee government at the Centre in 2003.

Promoted
Listen to the latest songs, only on JioSaavn.com
Mr Singh became the BJP president on December 31, 2005, after L K Advani was forced to step down from the post in September that year following his description of Mohammad Ali Jinnah as a "secular'' leader. Mr Singh's first innings began on a stormy note, as he dropped Gujarat chief minister Narendra Modi from the BJP's central parliamentary board, and Arun Jaitley from the post of the party's chief spokesperson. In fact, his tenure as party president was marked by an intensification of infighting.

Wiser from the mistakes committed by him in his first stint as BJP president, Mr Singh is more cautious now. He has emerged as the most vociferous backer of Mr Modi, and was, in fact, instrumental in his elevation as the BJP's prime ministerial candidate.