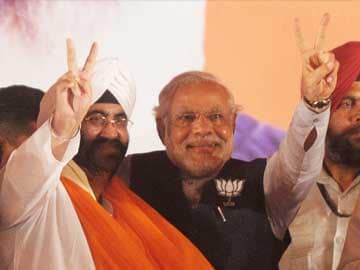 New Delhi: A day after Prime Minister Manmohan Singh rejected all talk of a "Modi wave" sweeping across the country, dismissing it as "a creation of media", his step-brother Daljit Singh Kohli today joined the BJP in the presence of its prime ministerial candidate.

Mr Kohli was present on stage  at the joint BJP-Shiromani Akali Dal (SAD) rally held tonight in Amritsar, the Lok Sabha seat being contested by Leader of the Opposition in the Rajya Sabha Arun Jaitley. Amritsar was the last stop in a series of rallies addressed by Narendra Modi in Punjab today, and it was also attended by Chief Minister Parkash Singh Badal. (Modi reaches out to farmers, promises higher prices for crop) It was the SAD veteran who informed the gathering that Mr Kohli had joined the BJP.

"Dr Manmohan Singh's brother has joined BJP and this will increase our strength. I welcome him to the BJP. This is not a party only of membership but of relationship. We will form a close relationship," Mr Modi said while welcoming Mr Kohli.

Mr Kohli's induction is expected to give a major talking point to the SAD-BJP combine to embarrass the Congress in the middle of the general election. (Elections: full coverage) The alliance is battling anti-incumbency to gain an edge over its rival Congress in Punjab. Opinion polls have a predicted a cliff-hanger in the state's 13 seats, which go to polls on April 30.

Promoted
Listen to the latest songs, only on JioSaavn.com
The SAD-BJP alliance has been ruling the state for the past seven years. Its efforts to surge past its rival have been hamstrung by popular discontent against the state government.

In the 2009 Lok Sabha polls, the alliance could only win five seats in Punjab, but bucked anti-incumbency to bounce back in the assembly polls held in the state three years later.