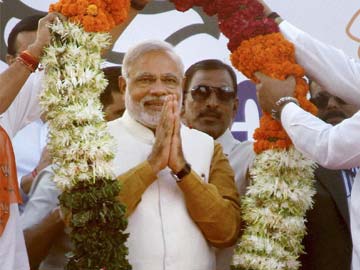 Narendra Modi being welcomed in Ahmedabad on Tuesday

New Delhi: Narendra Modi has invited the leaders of Pakistan, Bangladesh and other South Asian neighbours to his oath ceremony as prime minister next Monday, in a bold step to embark on a policy of regional engagement. (Modi to Be Sworn In As India's 15th PM on May 26)

The BJP's southern ally MDMK is opposed to Mr Rajapaksa's participation. MDMK chief Vaiko and many other Tamil political parties allege that civilian casualties of the Tamils peaked during the last leg of the war against LTTE with Mr Rajapaksa at the helm of affairs. (World Leaders Congratulate Narendra Modi)

Pakistan's high commission has received the invitation, which is issued formally by the foreign ministry. But sources say that instead of attending the ceremony himself, PM Nawaz Sharif will send a representative. After his own election last year, Sharif's administration had also suggested that the Indian PM be invited to attend his inauguration ceremony, but Dr Singh declined. (Rashtrapati Bhavan Rolls out the Red Carpet for Narendra Modi and His Guests)

The move by Mr Modi signals a huge shift in the BJP's position on Pakistan leaving behind much of the rhetoric of election campaign and is welcomed by Kashmiri leaders.

"Excellent move by @narendramodi to invite SAARC leaders, especially Pak PM for his swearing in. Hope this is beginning of sustained talks (sic)," Jammu and Kashmir chief minister Omar Abdullah tweeted. Minutes later he again posted, "At the same time I can't help wonder what BJP would have said if a PM designate Rahul Gandhi had done the same thing."

Promoted
Listen to the latest songs, only on JioSaavn.com
Mr Modi's huge victory in the general election gives him the political capital that his predecessor Manmohan Singh, weakened by a raft of graft scandals and public discontent at home, did not have. The BJP has indicated that Mr Modi will work to a re-crafted foreign policy. (Twitter Friendship Blossoms Between Modi and Japanese PM)