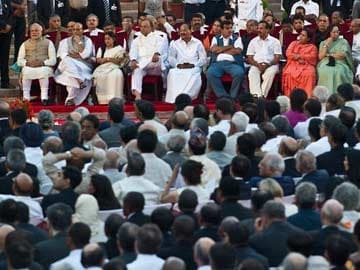 Newly sworn-in Indian Prime Minister Narendra Modi sits with his council of ministers during an oath of office ceremony in New Delhi on May 26, 2014.

Islamabad, Pakistan: The oath-taking ceremony of Narendra Modi as the 15th Prime Minister of India was shown live by Pakistani television channels highlighting the presence of various high-profile guests, such as Premier Nawaz Sharif, other SAARC leaders, Bollywood stars and corporate bigwigs.

Different TV stations also presented special talk shows on the occasion and experts explored the possibility of opening of new chapter in relations between Pakistan and India.

In one such show, experts said that the time has come for betterment of relations between Pakistan and India.

"It is important that incidents like Mumbai attacks do not happen, otherwise things will deteriorate. Peace is important for regional stability and also for development of Pakistan," said Mr Masood.

Security expert Hassan Askari Rizvi said peace was important for the development of both countries.

Peace with Pakistan is also in the interest of India, said Mr Rizvi.

Veteran journalist Nazir Naji said that all issues would be addressed and solved otherwise comprehensive peace will not be possible.

Experts also said that both India and Pakistan should grab the opportunity provided by the visit of Mr Sharif for Mr Modi's swearing-in.