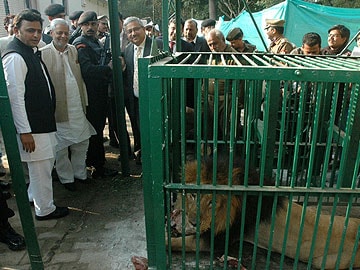 Six lions from Gujarat's Gir are currently in a Lucknow zoo.

Etawah: The six beautiful lions from Gir in Gujarat who are in a zoo in Lucknow have spawned a catfight in Uttar Pradesh between Chief Minister Akhilesh Yadav and Narendra Modi, the BJP's prime ministerial candidate.

"We have made a huge cage in Etawah, where we will keep these Gujarati Lions and not let them out," the chief minister said at a rally, suggesting the political taming of Mr Modi, who is running for parliament from Varanasi in Uttar Pradesh.

At earlier public meetings, Mr Yadav's father, Mulayam, who heads the Samajwadi Party, had said that Mr Modi will "not be allowed to turn UP into Gujarat," a reference to the state's communal riots in which hundreds of Muslims were killed in 2002.

Mr Modi's full-throated repartee followed quickly, also at a rally in Uttar Pradesh. He said last year, Gujarat sent over six of the 10 lions requested by the Samajwadi Party for a safari that's being planned in Etawah, the homestead of the Yadavs.

"The Chief Minister asked us for lions. We thought he would find some courage, but he cannot handle the lions of Gujarat. A lion from Gujarat only knows how to live with someone lion-hearted."

Promoted
Listen to the latest songs, only on JioSaavn.com
The lions at the heart of the roaring debate feature prominently in ads promoting tourism in UP, largely because of the chief minister's interest in them. The sudden infusion of politics bites, no doubt.