It is a Matter of Pride for Family: Prime Minister Narendra Modi's Brother 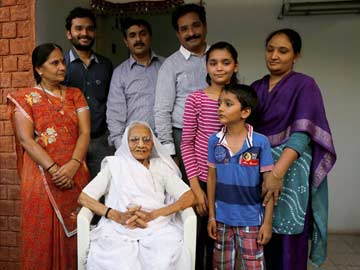 Ahmedabad: Prime Minister Narendra Modi's family is proud that he has taken the oath for the Prime Minister of India, one of his family members said in Ahmedabad today.

"I am extremely happy that Narendrabhai is becoming India's PM. It's a matter of joy and pride for all family members. We could have gone there to attend the swearing-in ceremony. However, we famliy members didn't want to divert his attention. Thus, we have decided to watch the ceremony on television," Prime Minister Modi's younger brother Prahlad Modi, who lives in Ahmedabad, told reporters.

"Another reason we didn't go, is because we don't want anyone to raise fingers at Modi claiming that he favoured his family. Thus, none of us went to attend the ceremony," Prahlad said.

"We just want to make sure that no trouble should be caused to him due to us (family members). We don't want to give a chance to anyone to allege that Modi believes in nepotism. Thus, we haven't gone to Delhi to attend the ceremony," Somabhai said.

Narendra Modi's mother Hiraben, who lives in Gandhinagar with another one of his younger brothers, Pankaj, also stayed back and witnessed the gala event on television.

A fireworks display was organised at 6.30 pm at Naranpura crossroads and Vyas Wadi area here, which are both places under the Naranpura assembly seat, held by Mr Modi's right hand, Amit Shah.

Similarly, the BJP Yuva Morcha also asked his workers to celebrate the day by distributing sweets and organise small rallies across Gujarat.