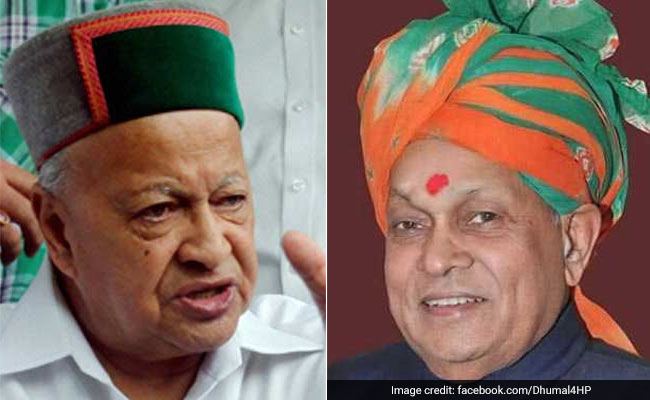 New Delhi: The Congress and the BJP fought the Himachal Pradesh election banking on the clout of their old guards. Chief Minister Virbhadra Singh, 83, who held the state's top post six-times, won an internal battle in his party the Congress to get projected again for the top post. The BJP chose not to name a chief ministerial candidate in the last six state elections, but made an exception in the hill state by declaring  73-year-old Prem Kumar Dhumal as their chief ministerial candidate. The change in strategy was impelled, sources said, as much by a need to counter the Congress' sneer that the BJP did not have a face to project against Virbhadra Singh. The election results will be out today, with counting starting at 8 am.

The two old guards of their respective parties campaigned aggressively in the elections.

Chief Minister Virbhadra Singh addressed over 90 rallies all over the state, while the BJP unleashed 40 star campaigners, including Prime Minister Narendra Modi, party chief Amit Shah and UP CM Yogi Adityanath. The Congress' star campaigner Rahul Gandhi turned to Himachal in the very last leg of the campaign. Much of the Congress' resources and attention were focused on the key state of Gujarat,

Both Mr Dhumal and Mr Singh, popularly known as "Raja Sahib" in the state owing to his royal roots, have mass appeal. Mr Dhumal is considered as the only challenger to the incumbent chief minister. Mr Dhumal, , the son of an army man, and a professor who still teaches, became chief minister first in 1998 and has since alternated in the top post with Virbhadra Singh.

The BJP's campaign was built around corruption charges that Virbhadra Singh faces; he is out on bail. In his speeches PM Modi accused the Congress for allowing "five monsters" to flourish - mining, forest, tender, transfer and drugs mafias, he said - and promised to free the state from them.

Promoted
Listen to the latest songs, only on JioSaavn.com
The poll of exit polls - an aggregate of eight surveys by television channels - shows the BJP getting 47 of the hill state's 68 seats. It shows the Congress ceding power and having to settle for 20 seats.

A party needs 35 seats or more to cross the halfway mark and form government in Himachal Pradesh. In 2012, the Congress had won 36 seats scraping past the half-way mark. The BJP had won 26.