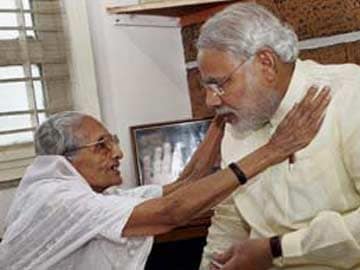 New Delhi: "Distressed" by Narendra Modi's mother travelling in an auto rickshaw and living in a small room, a Congress leader today wrote to BJP's PM candidate volunteering to look after her as Mr Modi had not provided her a "comfortable" life despite his "wealth" and success.

"I fail to understand how you could not provide a comfortable life for your mother who spent her entire life trying to ensure a brighter future for you."

"Your mother is like my mother. I have immense respect for her. I may not be as resourceful as you are, but I would request you to allow me to provide her all the necessary comforts of life according to my capacity," Mr Alvi said in a letter to Mr Modi.

Mr Alvi lamented that Mr Modi has been telling in his campaign all along that his mother raised him single-handedly in the most difficult conditions. "You mentioned how she had to work in the neighbouring households to ensure that she could look after you properly."

"With her dedication and hard work, she brought you up in a way that you could not only rise to become the Chief Minister of a state like Gujarat, but also went on to become the PM candidate of your party", he told Mr Modi.

At the same time, he told Mr Modi that he was "deeply pained" when he came to know that the mother of the Gujarat Chief Minister still lives in an 8x8 room.

"I was also distressed when I saw that she travelled in an auto rickshaw to cast her vote recently," he said noting that in Indian culture, when the son does well in life, the first beneficiaries of the success are usually the parents.

"Modiji, recently when you filed your nomination, you disclosed assets worth more than Rs 1.25 crore. I am baffled how even as an ordinary person who has so much wealth, you fail to provide necessary comforts to your mother.

"We regularly see how you travel in private jets and cavalcades of many luxury cars. We also know of your love for your designer watches and Mont Blanc fountain pens," he added.