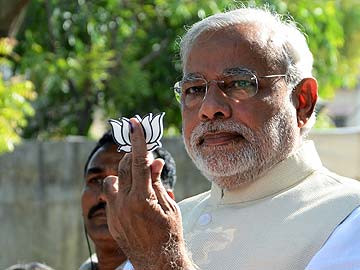 Narendra Modi holds up his ink-marked finger and the party symbol as he poses for a photograph after casting his vote at a polling station in Ahmedabad.

Commission sources said the law prohibits election canvassing within 100 metres of the polling area. But, they say, it does not prohibit people from wearing clothes that display a party symbol.

Both the Congress and the Aam Aadmi Party have also pointed to Mr Modi being seen with a prominent lotus, his party's symbol, while he voted and as he addressed the media. (Also Read: Round 7 of polls: top 10 facts)

The EC sources pointed out that voters cannot be asked to hide their hands, which is the Congress' symbol, or, say, put away their spectacles, which is the symbol of the Indian National Lok Dal headed by Om Prakash Chautala. (Also Read: Big guns in top 10 contests today)

While the state Congress cried foul, in Delhi the party's spokesperson Meem Afzal confirmed that it had complained to the Election Commission.

Promoted
Listen to the latest songs, only on JioSaavn.com
"I think it is a violation of code of conduct...he held a press conference near the polling booth...His nomination must be cancelled from both the constituencies. He thinks he is above the law and order of the nation," he said. (Also Read: Modi's Varanasi roadshow a poll violation, says Congress)

The BJP is yet to react.