Coming soon to a screen near you: Narendra Modi in 3D 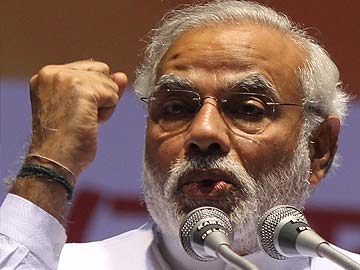 Delhi: A 'recorded video speech' of BJP's prime ministerial candidate Narendra Modi will be shown in 3D on Monday at 300 places across the country, including at 18 places in Delhi.

"In Delhi, all seven Lok Sabha constituencies will have at least two spots to host the screening, while some will have three," Mr Gupta said.(Narendra Modi's political journey from RSS worker to BJP's PM candidate)

Small cities like Allahabad, Varanasi, Kanpur and Patna, among others, will also have facilities to watch the 3D speech.

Mr Khurana claimed that such a concept had been tried on a small scale during Gujarat elections but this was a much larger canvas and a first-of-its-kind in Lok Sabha polls.

Earlier in the day, Mr Gupta addressed a joint press conference and accused the Congress of dabbling in "communal politics". He was flanked by Jha, who referred to Sonia Gandhi's meeting with the Shahi Imam of Jama Masjid.

Jha said party workers had started a 'vijay sankalap yatra' to seek votes for the April 10 polls in Delhi.

Attacking the Congress's regime and Arvind Kejriwal's brief tenure as Delhi chief minister, they cited "police data" to claim an increase of over 400 per cent in molestation cases
in the national capital.

Taking on the Aam Aadmi Party's regime, he accused the Kejriwal government of performing equally badly, if not worse, in the area of women's security.