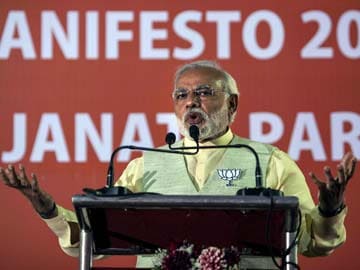 New Delhi: Narendra Modi, the BJP's prime ministerial candidate, today promised good governance and inclusive development as his party released its manifesto on the first day of polling in the general elections. (Watch)

The much-delayed document is a rewrite of the "Modi vision" that he handed the party at a conclave in January. Economic growth and inflation are headline points, the Hindutva agenda is muted. (Read full text of the manifesto here)

Signing off on the 42-page manifesto, Mr Modi pledged, "I will not do anything with ill intent. I won't do anything for myself personally. I will not hesitate to work hard for the country." (Read more...)

His promise to work without prejudice comes days after his trusted aide Amit Shah made a controversial call for "revenge" in riot-scarred Muzaffarnagar in Uttar Pradesh. (Amit Shah gets Election Commission notices)

After much speculation over a divide within on the party's poll agenda, the manifesto came with a predominant Modi imprint.

In a manifesto that promises economic revival, the BJP says it will link welfare schemes like the Congress-led government's rural jobs scheme to assets creation. The party promises focus on infrastructure such as 100 new cities, high-speed bullet trains and broadband Internet even in villages. (10 differences between the Congress and BJP manifestos)

The BJP said it is open to Foreign Direct Investment in all sectors where jobs can be created, except in multi-brand retail, shutting the door to global supermarkets. It also promises simplified taxes, low-cost housing for every family and a new national health policy. (In muscular manifesto, BJP shuns global retailers)

The promise to work towards a Ram temple at a disputed mosque site in Ayodhya is mentioned only on page 41, that too with a rider that it would be "within the constitutional framework." In 2009 the stand was more belligerent "committed to facilitate the construction of Ram temple". (BJP uses 'Ram' for political gains: Congress' Digvijaya Singh)

Promoted
Listen to the latest songs, only on JioSaavn.com
This time, the party has also said it will consult stakeholders for the removal of Article 370 of the Constitution granting special status to Jammu and Kashmir. It has also promised a uniform civil code to reflect current realities. (Omar Abdullah attacks BJP manifesto over Article 370)

The manifesto was seen to reflect the loosening grip of the BJP's old guard backed by the Rashtriya Swayamsevak Sangh (RSS), the party's ideological mentor, which believes that the BJP should not neglect its core constituency. (Watch: Is the BJP moving away from 'Ram Mandir'?)